Brazil Come From Behind to Win World Cup Opener 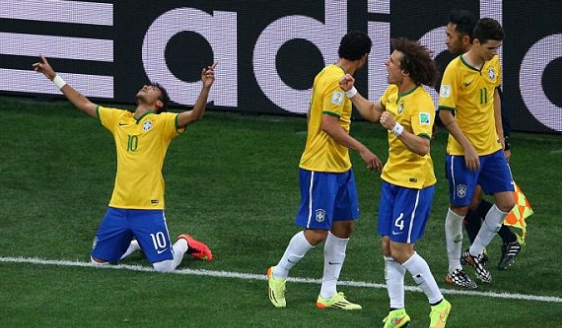 After millions of people around the world suffered through a boring and slightly creepy opening ceremony, the 2014 World Cup got underway with a less than convincing display from the host nation, Brazil, who beat Croatia 3-1.

The Brazilians looked nervous as they took to the pitch but certainly didn’t lack passion with every player belting out the national anthem at the top of their lungs. However, it was the Croats that struck first after 10 minutes when Olic picked up possession on the left wing and thrusted a dangerous ball into the box looking for Nikica Jelavic who missed a sitter from six yards out. Luckily for the Hull City striker, Brazilian left-back Marcelo could not get out of the way and knocked the ball into his own net, silencing the Sao Paulo crowd.

Things didn’t look to be going Brazil’s way as Neymar charged into ex-Spurs man Luka Modric with a forearm smash, something you would expect from the aptly named Hulk. However, the so-called poster boy of the 2014 World Cup was let off the hook with just a yellow card by the Japanese official Yuichi Nishimura, who was not having a good day at the office.

Only minutes later, Neymar had the Croats picking the ball out of the net as he charged from the centre circle towards Croatia’s penalty area where his scuffed shot from 20 yards out somehow managed to beat goalkeeper, Pletikosa, who was also having a torrid days work.

The two sides went in level at half time with Croatia surprisingly looking the more comfortable. Although Brazil had dominated possession, chances were lacking from a team tipped to be among the favourites.

It was more of the same in the early stages of the second half, with Modric continuing to control the pace in an impressive performance as the Croats obviously favoured the counter attack. All their hard work however, was soon to be undone when Croatia defender Lovren was deemed to have pulled down Fred in the penalty area as the Brazilian striker dramatically dropped to the floor. The Japanese referee kindly obliged to the penalty shouts from the home nation but after seeing the replays, it was another poor decision. Neymar stepped up to score his second of the game, again receiving a bit of fortune as the Croatia ‘keeper got two hands to the ball but couldn’t divert it from the goal.

Nishimura completed his hat-trick of bad decisions as Croatia had a goal disallowed. Olic challenged Julio Cesar in what looked like a fair challenge and Croatia had the ball in the back of the Brazilian goal but the referee had already blown for the aforementioned challenge. It was never going to be Croatia’s night.

Oscar put the Croats to bed with a rather bizarre goal from 20 yards out in which he toe poked the ball past Pletikosa, a shot the Croat probably should have handled better. Although there can be no complaints as the Chelsea man was by far Brazil’s brightest spark, only second to Real Madrid’s Luka Modric on the night.

Two things can be taken from this World Cup opener. Firstly, the Croats have a lot more to offer in this competition and should be given a lot of respect in future games. Secondly, and probably more surprisingly, Brazil don’t look like a team to be feared. Not yet, at least.