Belgium Advance After Game of the Tournament 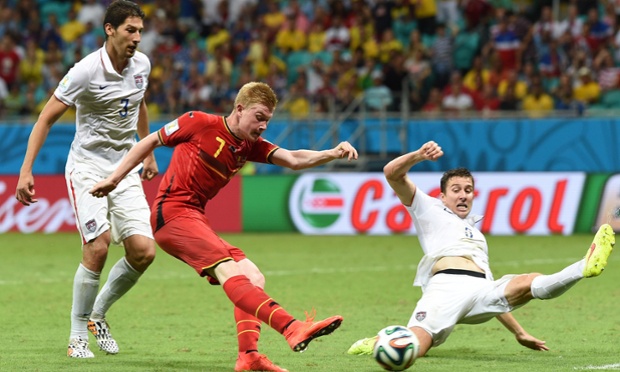 A game expected to be a tight affair became the best football match the World Cup has seen for a very long time as Belgium narrowly managed to see off the United States after extra-time in a stunning spectacle, which ended 2-1.

The first chance came within 40 seconds as Origi, preferred to Lukaku, was threaded through on goal but couldn’t find the net as Tim Howard prevented a disastrous start for the United States.

It was end to end stuff throughout the first half with either side looking to break on the counter attack and Clint Dempsey kept the Belgian ‘keeper alert after 20 minutes as he combined well with Michael Bradley on the edge of the box but couldn’t quite get the ball out of his feet for a clean strike, making it easy for Courtois.

The Belgians again went on the counter attack just moments later as Zusi gave away possession in the centre circle, leaving his defence three on four with the Belgian attack but De Bruyne scuffed a great chance and witnessed his shot harmlessly trickle wide of Howard’s post. It seemed as though the Americans were under the cosh now as left-back Vertonghen stormed down the wing and into the box but didn’t manage to find Fellaini at the back post after some desperate defending from the ‘USMNT’.

The troubles began to pile on Jürgen Klinsmann’s team as arguably the US’s best player on the pitch, Fabian Johnson pulled up clutching his already heavily-strapped hamstring, interestingly, not the first US player to do so this tournament. He was replaced by Yedlin on the half hour mark.

Not many clear cut chances were created in the final 15 minutes of the first-half but Dempsey made good work of a corner from Zusi, controlling it impressively and giving it to Jermaine Jones 18 yards out, but Jones was unable to hit the target.

It was all Belgium after the break as just two minutes into the second half, Belgium threatened when Dries Mertens looped a header towards goal, leaving Howard scrambling to touch it over his crossbar. The best chance of the game so far came a couple of minutes after as Vertonghen sent a great cross from the left across the US box but amazingly no one managed to get on the end of it, replays showing Origi certainly should have scored.

The Lille striker began to cause problems however, as he saw his header bounce off the top of Tim Howard’s crossbar and 10 minutes later forced the Everton ‘keeper into a decent save.

The United States were getting somewhat of a look-in as Clint Dempsey had two fairly tame shots from range saved by Courtois, the latter he may have been better feeding his teammate Alejandro Bedoya.

Mertens’ replacement Kevin Mirallas went through on goal, one on one with his Everton teammate, but Howard made a terrific save with his feet to direct the shot wide. He then created a fantastic chance for Eden Hazard as he ran between two US defenders and whipped a cross into the box but Tim Howard was there yet again to deny the Chelsea forward.

Belgium were relentless in the final 10 minutes of normal time with Hazard whipping his shot into the side netting and a surprising appearance from Vincent Kompany in the US penalty area had Howard scrambling across his goal to keep a scuffed effort out as extra-time loomed.

Romelu Lukaku replaced Origi for extra-time and instantly made an impact as he powered down the right wing and found De Bruyne who struck the back of the net at the second time of asking, which looked to take the legs from under the Americans.

Lukaku and Mirallas both had good chances in which they were one on one with the goalkeeper but neither could squeeze it past Howard. However, seconds before the end of the first half of extra time, De Bruyne fed Lukaku past the US defence and he hammered home for his first World Cup goal to make it 2-0.

Almost instantly after the restart, the USA found themselves back in the game as Michael Bradley’s straight ball over the top found substitute Julian Green who brilliantly slotted past Courtois. The USA suddenly sprung to life as Jermaine Jones almost tucked away a second goal in quick succession but just couldn’t find the target.

Lukaku was on the break again though, as he twisted through two defenders but couldn’t find the goal again because of the human wall of Tim Howard.

The US nearly equalised through Clint Dempsey using an incredible training ground free-kick that had the Belgians fearing for their lives but the ‘keeper was quick off his line to prevent the United States having the chance to advance in the tournament.

A crushing defeat for the United States of America but they are surely the story of the tournament. Belgium will go on to face a stiff test in Argentina in the quarter-finals.