Argentina Through To The Semis 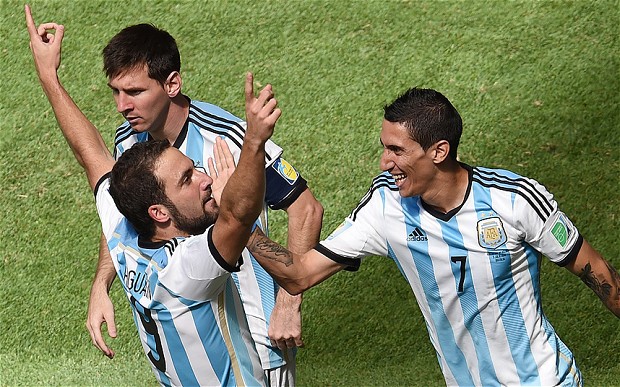 It was a game contest between two of the World Cup’s sides with 100% winning records at this years tournament, but an early goal from Gonzalo Higuain was all it took for Argentina to book their place into the World Cup semi-finals for the first time since Italia ’90 by beating Belgium 1-0.

The South American nation struck first after just eight minutes when Lionel Messi danced around the ball almost confusing the Belgian defence and Angel di Maria’s pass was deflected into the path of Napoli front man Gonzalo Higuain, who volleyed the ball past Thibaut Courtois.

Early on in the second half,  Higuain nearly made it 2-0 to Argentina as his side broke through on the counter attack and Higuain nutmegged the Belgian captain Vincent Kompany but his shot went past Courtois and hit the top of the bar.

The best chance in the first half for Belgium came from a  Jan Vertonghen cross that was met by Kevin Mirallas, but the Everton player couldn’t hit the target. On the hour mark, Vertonghen yet again produced a top class cross that was this time met by Manchester United’s Marouane Fellaini, but the United man couldn’t quite keep the header down.

Argentina made three changes to their starting eleven as Lucas Biglia, Jose Maria Basanta and Martin Demichelis came in for Fernando Gago, Federico Fernandez and Marcos Bojo. Whereas, the Belgians made only one change as Kevin Mirallas came in for Dries Mertens.

In stoppage time, Lionel Messi did a thing unlike what we normally expect of one of the best players in the world missed a one on one attempt as his effort was blocked by the Belgian keeper Courtois.

To get to this stage, Argentina had beaten Bosnia-Hercegovina, Iran, Nigeria and it took a late Angel di Maria goal in extra time to eliminate Switzerland in the Round of 16. Belgium had also won all of their four games to get this stage as they beat Algeria, Russia, Belgium and it took extra time to beat the United States in Salvador.

It was strange in this campaign that Manchester United’s latest breakout star Adnan Januzaj only played sixty minutes of this tournament in a throw away match against South Korea. But they should be proud to get to the Quarter Finals as for all of them, it was a first taste of World Cup football. Many critics will be disappoint that they didn’t go further than the Quarters and that they under performed though out, with Eden Hazard not dazzling us like he does in a Chelsea kit.

Argentina will now go on to play the winners of the match between the Netherlands and Costa Rice in the semi finals.