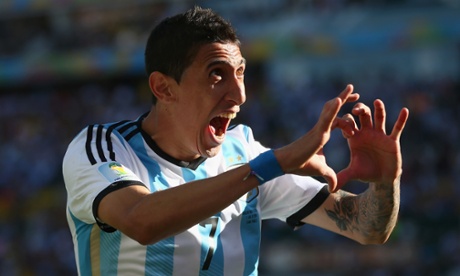 Argentina needed extra-time in order to get past Switzerland in their World Cup last 16 game in Sao Paulo, as they left it late to score the only goal of the game, ensuring their progress into the quarter finals.

After being only one of four sides to win all three of their group stage matches, Argentina were expected to get past Switzerland with relative ease as they look to win their first World Cup since 1986 and with Messi and Co. leading their attack it looked like it was going to be a long afternoon for the Swiss; even if Argentina were missing Manchester City striker Sergio Aguero through injury. That however was not the case as Switzerland did not allow Argentina to play their usual game throughout, minimising the South American side’s chances during the first half.

The first major chance of the half came in the 8th minute as Napoli midfielder Gokhan Inler found himself in space and took a long range effort at goal, the shot itself did not test the Argentinian keeper as it sailed harmlessly wide of the goal. After that it was all Argentina as they went about their game trying to get the first goal to put themselves in the driving seat, although a resolute Swiss defence limited Argentina to crossed attempts, which they were more than happy to clear. The closest Argentina came to opening the scoring was in the 24th minute as Gonzalo Higuain attempted to get onto the end of a Di Maria cross; the Napoli striker narrowly missing the ball much to the relief to the Swiss keeper Benaglio.

Switzerland got arguably the best chance of the half as a quick counter lead to Drmic finding himself open on goal. The Bayern Leverkusen striker just had to slot the ball past the ‘keeper but decided to go with a fancy chip to get the ball over the keeper, which didn’t give Romero much trouble as he had the entire play read before the shot had even got to him.

And with that, the first half came to a close, much to Argentina’s frustration as they would have preferred to be ahead at this stage but for some fantastic Swiss defending throughout the first half. Although it did not take Argentina long to get their first chance on goal as Lavezzi found Higuain in the Swiss box, the former Real Madrid man was all but through on goal but Hannover defender Johan Djourou came in with the block to save his side.

Argentina started to turn the screw throughout the second half as the Swiss players took their foot off the gas a bit during the game, giving Argentina much more space to move about and create chances. Higuain came close again as he got onto the end of a cross by Rojo, only for a quick reflex save by Benaglio keeping the scores level. Lionel Messi, who had a quiet game, registered his first chance on goal as he tried to emulate James Rodriguez’s goal. His chance went just over the goal not giving the Swiss keeper much to worry about.

Messi was the man again to threaten the Swiss goal late on in the game as he shrugged off Behrami before shooting towards the near post. Benaglio saved the shot but failed to hold onto it as the rebound fell to Palacio but he failed to capitalise on the chance as the Swiss defence cleared the ball to safety.

With both sides failing to get a goal in the first 90 minutes, this only meant one thing; extra time. Both sides looked like they could run for another 90 minutes but the next 30 additional minutes were what we were going to be treated to. Argentina almost emulated Germany as they got a chance in the first minute of extra time. Although unlike Germany they failed to take it as Benaglio kept out another Argentinian header to keep the sides level as Argentina continued to turn the screw throughout the first half of extra time. Switzerland failed to register many attempts on goal throughout extra time, but they threatened towards the end of the first half of extra time as it appeared that Argentina had just ran out of steam and ideas.

With a matter of minutes left in the second half of extra time, Messi found himself in acres of space after picking up a pass in the midfield. The Barcelona man dribbled towards the Swiss defence, pushing them back into their own box before exploiting a gap in their defence to slot the ball through to Angel Di Maria. The Madrid winger made good of his chance as he slotted a curling ball into the far post. Benaglio could have done more to keep the ball out but the ball was so well placed you couldn’t fault the keeper.

With that goal it seemed all but done as Argentina looked to hold on for the last few minutes to book their place in the Quarter finals. However, the drama was not over as Dzemai got his head onto the end of a corner. The Naopli midfielder’s attempted smashed off the post not before the ball came back and hit his shin and going wide. The Swiss were literally millimetres from getting their goal to level things as another day that might have been a goal. They also got one last chance in the dying embers of the second half as Xherdran Shaqiri went down under a tackle to win his side a free kick just outside the box. It was now or never for Switzerland as they desperately needed a goal to keep themselves in the tournament and to force it to penalties. Unfortunately the Bayern man smashed the free kick into the wall with the ref blowing the whistle a matter of seconds after to signal that Argentina were through to the Quarter finals.