Are The FA Really Tackling Racism? 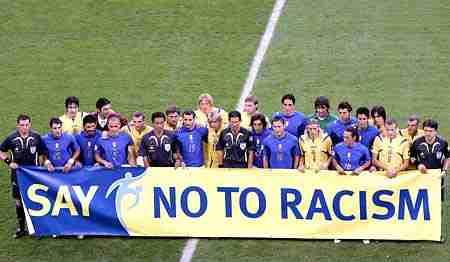 But recently it’s not these that have been grabbing the headlines, it has been racism. Players, fans and even referee’s have all hit the headlines due to being accused of racism cases.

The FA are one of the leading organisations in tackling racism in football, but the recent cases has dented this opinon and leads to question being asked; Is racism still a major issue in English football?

Former England captain John Terry was found guilty of ‘using abusive language’ and making ‘reference to colour and/or race’ and this case lead to Terry retiring from international football.

One of the leading racism groups in football, Let’s kick racism out of football, was shunned by Anton and Rio Ferdinand and Reading’s Jason Roberts in a recent publicity attempt as the players thought the organisation wasn’t doing enough and didn’t wear the shirts promoting the group.

This was ill-timed as the weekend where the players were expected to wear the shirts was October the 20th, only three weeks since Terry was found guilty so maybe the feelings of the case were still pretty raw.

In the recent Captial One cup clash between Chelsea and Manchester United a fan has been accused of being a racist after being caught on camera to be doing an apparent ‘monkey gesture’ towards United’s Danny Welbeck. It appears that this was the only fan to take part, but it highlights an issue, racism is not completely out of football in England.

But it’s not a widespread issue, maybe if referee Mark Clattenburg is found guilty of his alleged racist comments towards John Obi Mikel, more questions will be asked.

By all means, work has to be done on tackling racism. But by looking at the Serbian under 21’s versus England under 21’s game and the consequent action the Serbian FA have done since, Serbia definetley have a major issue of racism in football. But if England keeps getting racism incidents occuring, how can we preach to country’s like Serbia.