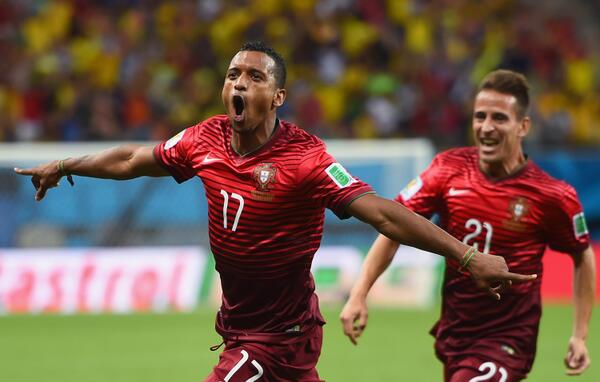 A late equalising goal from Portugal’s Silvestre Varela saved the skin of his nation as Portugal had to settle for a 2-2 draw against an impressive United States side.

The United States made one change to their side who beat Ghana as Sporting Club Kansas midfielder Graham Zusi came in for the injured Sunderland striker Jozy Altidore. Portugal made four changes to the team who were destroyed by Germany as Beto came in for goalkeeper Rui Patricio, Helder Postiga in for Hugo Almeida, Andre Almeida for Fabio Centrao who is now out of the tournament due to injury, and finally Ricardo Costa came into the starting eleven to replace the suspended Pepe.

Portugal made the perfect start as after just five minutes, US and Stoke defender Geoff Cameron fluffed a clearance that fell straight into the path of Manchester United winger Nani and he put the ball past Everton goalkeeper Tim Howard from six yards out.

Portugal nearly made it 2-0 just before the half time break when Nani from around 25 yards out cracked a low shot onto the post and substitute Eder tried to chip the rebound but Tim Howard managed to get a hand onto the ball to tip it over for a corner. Eder had to come on after fifteen minutes as Helder Postiga had to go off due to injury.

The US nearly scored ten minutes into the second half as Fabian Johnson put a low ball across the box that Michael Bradley met but it was stopped on the line by Ricardo Costa to keep the scoreline at 1-0.

But the United States came back and they equalised in style. Just after an hour had passed on the clock, Jermaine Jones hit an absolute corker that just kept curling until it hit Beto’s left hand corner of the goal, after Portugal failed to adequately deal with a corner.

The US went into pandemonium as Clint Dempsey put them in the lead for the first time in the game after a scrappy bit of play saw Graham Zusi get the ball and put it across the six yard box before Dempsey pushed it over the line with his body.

The drama didn’t end there as with less than 30 seconds left of stoppage time, Portugal’s talisman Cristiano Ronaldo whipped in a perfect cross that was met with a diving header from substitute Silvestre Varela to the dismay of the American nation and especially goalkeeper Tim Howard, who had his head in his hands as soon as the ball went in.

The final whistle signalled heart break for the Americans who were nearly half a minute away from not just a famous victory, but half a minute away from qualifying from the group stage. Portugal and Ronaldo in particular will be mightily relieved that they got a late goal as they for the second time in this tournament under-performed and looked weak.

It now goes down to the final games of the group stage as Portugal need to get a victory against Ghana, who also need to get a victory in their final game. The United States have it all in their hands as they just need to avoid losing to qualify, but they will be playing the team who are top of their group, the mighty Germany. Whatever happens, these games are going to be crackers.