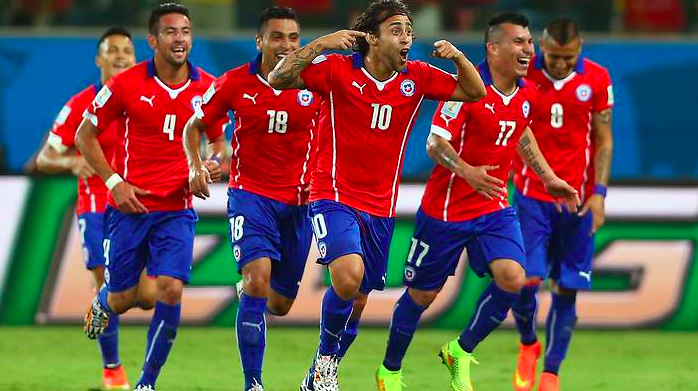 Goals from Alexis Sanchez, Jorge Valdiva and Jean Beausejour gave Chile all three points in their opening Group B game against Australia, the lowest ranked team in the tournament.

It took Chile just eleven minutes to take the lead as messy defending from Australia handed the chance for Barcelona forward Alexis Sanchez to pounce from close range, and he took advantage of his opportunity perfectly. Just seventy seconds later, Chile made it 2-0 as Sanchez put Jorge Valdiva though and he hit a beautiful side footed effort past keeper Matthew Ryan into the top corner of the Australian goal.

Australia got a vital goal back in the game ten minutes before the end of the first half from their talisman Tim Cahill. The former Millwall and Everton talisman, now playing in the MLS for the New York Red Bulls, rose above the Chilean defence and reached a cross with his head to make it 2-1.

The second half saw Tim Cahill grab a second, or at least he thought he had but his goal was given  as offside. Australian veteran Mark Bresciano nearly did make it 2-2 in the tie after hitting a lovely floated cross on the volley, but Chile’s captain and goalkeeper Claudio Bravo parried the shot out for a corner.

Eduardo Vargas could have put his side 3-1 up after he poked the ball past Matthew Ryan but Aussie defender Alex Wilkinson cleared the ball off the line just in the nick of time.

Chile confirmed the victory when Wigan winger Jean Beausejour’s low drive from just outside the box went into the bottom of the corner to make it 3-1 and put them second in Group B, behind the Netherlands on goal difference.

It was a dominant display from the South American outfit, who finished third in qualifying for the tournament, and are seen by many to be one of the dark horses to go on and go far in this years tournament. For Australian, it was unfortunate that they conceded a late goal in injury time as they didn’t necessarily deserve to lose by a two goal margin. They did however take too long to get into the game as they conceded two goals in around two minutes which cost them dearly. Australia can take their heart from their performance but it’s going to be tough getting anything from this group now they have to play the 2010 World Cup finalists in their final two games.

Chile’s best display in the World Cup to date was third in the 1962 World Cup as hosts of the tournament, whereas Australia’s best performance was getting to the second round of the 2006 World Cup before bowing out to a Francesco Totti penalty.

Next up for both sides are tricky ties. Australia are going up against Spain’s conquerers the Netherlands and Chile go up against Spain in what could be the decider for who goes through to the next round.