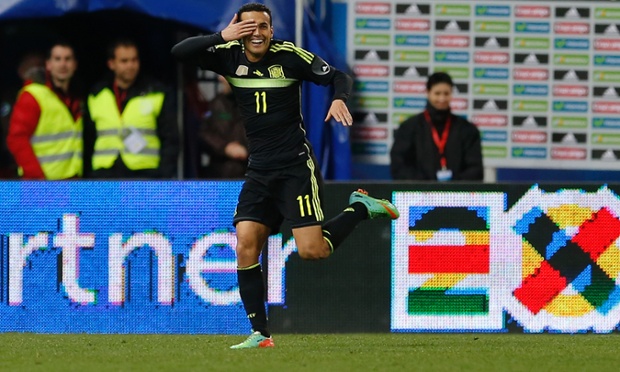 On the one hand if you’re a Spain fan right now it must be somewhat sad to see the likes of Villa, Torres, Mata and (especially) Puyol dropped from the international squad. On the other, to see those players replaced by the likes of Thiago Alcantara, Koke, Diego Costa and so on, must make you smile from ear to ear.

Diego Costa, the source of much debate in Spain right now, lined up for his debut tonight against Cesar Prandelli’s Italy in a rematch of the Euro 2012 final and a chance for Italy to secure their first win in five games. Italy were without Mario Balotelli (injury), Andrea Pirlo (substitute) and Danielle De Rossi (not picked) in their starting line-up for this fixture at the Vicente Calderon Stadium.

A tribute to the late, great former Spanish national coach Luis Aragones prefaced proceedings in the Spanish capital but it didn’t take long for either side to find their groove and get their first chances registered. Spain’s first effort predictably involved Andres Iniesta who combined well with teammate Jordi Alba to tinker his way around the Italy defence before giving the ball back to Alba who, had he not delayed pulling the trigger, would have surely tested Italian keeper Gianluigi Buffon. Italy similarly had chances early on, striking the post in the third minute from a wayward cross as the intense pace of play continued to wreak havoc on both defences.

Spain soon settled into their usual possession style of play with Iniesta, who seems to reserve his best form for playing Italy, pulling the strings all over the pitch. What had been a frantic opening quarter of an hour, inevitably soon died out as both sides cancelled each other out somewhat with some impressive battles going on in midfield.

Diego Costa was relatively ineffective early on with his opposite number and former Southampton rebel, Dani Osvaldo creating the best chance of the match just before the half hour mark. Capitalising on a lapse in concentration from the Spanish rear-guard, as well as getting a tad lucky with a nutmeg on Javi Martinez, Osvaldo had Iker Casillas beaten in the Spanish goal however he also narrowly beat the post as the ball curled slightly wide.

The pace and intensity of the game ticked over nicely up to and beyond half time before both sides took their chances to make significant changes to their line-ups. Spain introduced Victor Valdes in place of Iker Casillas whereas David Silva replaced Fabregas and Xabi Alonso replaced Busquests. Italy were busy too, bringing on Abate, De Sciglio and Pirlo for Maggio, Criscito and Candreva respectively.

The influx of fresh blood meant that the intensity of the first half could be kept up, much to the pleasure of any neutrals watching this fixture. Spain were labouring much more to make the openings than they were in the first half though however just before the hour mark all of their effort paid off. Playing terrifically throughout this fixture, Iniesta and Pedro were instrumental in the goal as the former had a backheeled pass deflected into the way of the latter who blasted a powerful shot through the arms of Gianluigi Buffon.

Iniesta and Sergio Ramos were then substituted for Jesus Navas and Raul Albiol – it must be lovely making substitutions when you’re Vicente Del Bosque – before Spain took the pace out of the game, restricting Italy to very few opportunities and sealing the victory on the night.

It’s becoming a bit of a cliché now but anyone looking for a lesson in anything to do with football – look no further than Spain. They’ve dominated the international stage now for six years, they’ve had their golden age of players and now they’re producing another batch of exceptional talents. Debating whether or not David Silva is good enough to get into the starting XI is a headache any manager would love to have, I’m sure! Similarly, Italy did very well tonight; look at the players they had missing. No De Rossi, no Balotelli, no Rossi – there’s much, much, much more to come from this Italy side and they only lost 1-0 to a very capable Spain side. Admittedly, it’s only a friendly and Spain let off the gas after 70 minutes but still, England had better watch out come June if Italy are in form like this.