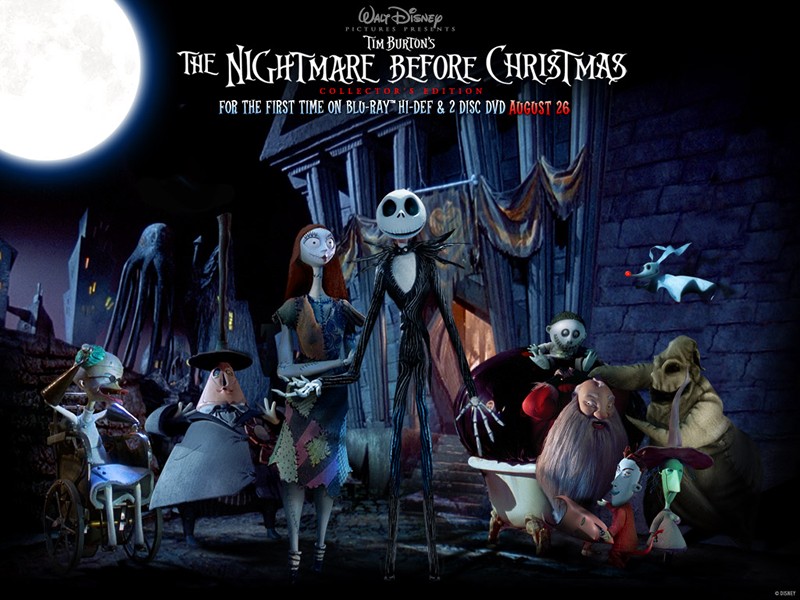 May I offer a hearty ho ho ho and a merry welcome to day one of a whole 25 days of Christmas movie funtimes! From now till Christmas Day I’ll be giving you a seasonal movie suggestion to help you through the present wrapping. And what better way to begin than with The Nightmare Before Christmas!

After much deliberation and even more debate on Twitter, The Nightmare Before Christmas seemed to be the best option to begin such a feature. Not only because it starts us off with a great host of wonderful songs which will stay in your head for weeks to follow and not annoy you but also because it seems to be the perfect bridge between Halloween and Christmas and leads us perfectly into the festive feeling we all crave around this time of the year. And at 73 minutes its just the right size to start us off!

It’s hard to not love this film and even harder still to not completely adore the film-making.  Stop motion technology has always fascinated me simply for the fact that I cannot fathom the idea of creating such a feat. At nearly 20 years old you’d expect to see much deterioration in the whole look and feel of the film and yet, somehow, it’s managed to keep the magic glowing. As we are introduced to the film it begins instantly with a catchy song and never ceases to add more to it’s list as Jack Skellington, the Pumpkin King of Halloween Town excitedly heads the towns biggest annual celebration (can you guess what it is?) only to then stumble upon Christmas Town and decide to give that a try as well. With hilarious outcomes which the whole family can enjoy. This film is as much for the adults as it is for the children. For the adults its a great nostalgia which will always have you singing along no matter how hard you try not to. But for the children its perhaps even more important. This has to be the most perfect film to introduce your child to Christmas films surely? It gives the child everything they’ll need to help understand the commercial side of Christmas (ie. PRESENTS!) whilst not yet confusing them with the whole religion side of it just yet.

Although it’s official title does bear Tim Burton’s name and it does have many of his traits, it shouldn’t be regarded as a Burton film. I mean for one, it doesn’t include Johnny Depp OR Helena Bonham Carter at all! Don’t worry though as we’re in safe hands with director Henry Selick (Whose following films have included James and the Giant Peach and Coraline) and we still do have one Burton signature featured with Danny Elfman providing the magical soundtrack of which this film heavily relies on. And who can forget the Oogie Bookie song! One of the greatest scenes in the whole film if it’s possible to choose but one. If you haven’t seen the film before I promise you that you shan’t be disappointed. And if you have seen it before… I don’t really need to tell you again how marvellous it is for you must surely already know.

Come back tomorrow for the rest of the Christmas movie Advent Calendar. Till then I’ll just keep you guessing what will be behind door number two and should you have any requests, ideas or angry comments don’t hesitate to leave one below!