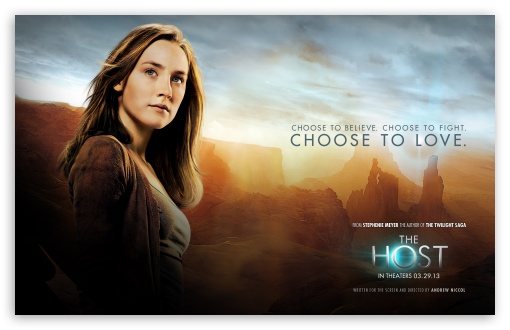 It’s been four months since the Twilight saga ended its reign of the box office with Breaking Dawn Part 2 and already we have another adaptation by the same author. However, this time we don’t have sparkly vampires or unemotional female leads.

Starring Saoirse Ronan, The Host is essentially another teen romance at heart, but with an interesting premise. Set in a dystopian future in which Earth has been overthrown by an alien race who use human bodies as a vessel to take over the world, the film does give some thought provoking insights into humanity.

Ronan plays Melanie Strider, a young girl who is part of a small human resistance. However whilst on the run from the surprisingly peaceful aliens, her body is soon invaded by Wanderer. As Melanie fights to stay alive in her own body, she shows Wanderer her memories of the loved ones for whom she is fighting, in the hopes that Wanderer will help.

At just over 2 hours long it does seem to stretch a bit. Time that could have been better spent expanding the themes more is instead spent on a love square rather than the traditional love triangle we’re all too familiar with, as Wanderer and Melanie both find themselves in love with different boys. A situation which doesn’t work two well with two personalities in the same body. And whilst it does entertain for the most part, there is the feeling that a better story could be told.

However, it’s not as anger inducing as the Twilight Saga (here the acting is somewhat better) it still lacks the spark it could have easily have had. At times it doesn’t seem to know whether it wants to be an action movie or a romantic drama and can’t seem to find the perfect line between the two, often switching between genre almost haphazardly.

Ronan proves yet again that she can hold a film up as she has done a number of times already in her short career. Whilst this is no Hanna it still provides as a worthy example of Ronan’s acting abilities as she manages to outshine the rest of her co-stars, although that’s not a very tough thing to do in a film like this.

Not the best release of the week but certainly not the worst either.