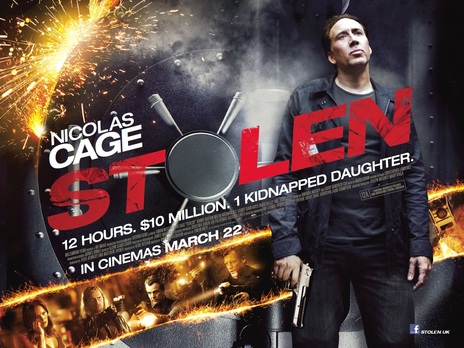 These days it seems going to see a Nicolas Cage film is almost the same as going to the casino. You could end up with more than you had and have you quoting Kick-Ass for the rest of your days, or it could leave you penniless and waking up to horrific nightmares of the debt you have to pay for watching his performance in The Wicker Man. Stolen happens to sit nicely in between the two. Although, at times it’s laugh out loud ridiculous, it will keep you entertained.

Cage plays Will Montgomery, a former thief who, after being released from prison finds that his old partner, presumed dead, is still alive and out seeking the $10 million they stole in their last heist. Montgomery races against time to find a way to get his kidnapped daughter back and replace the $10 million he threw away when he was caught.

In the 96 minutes that follows we are treated to some of the most dire dialogue and the longest opening sequence ever made as we see Mongomery’s botched attempt at stealing $10 million in almost real time. A sequence which was covered easily in a few seconds in the trailer but which director Simon West seems to take about 30 minutes explaining. Had he narrowed it down to five or ten he could have had more time focusing on things like character and storyline and maybe even possibly script to make for a more fun filled ninety odd minutes.

It’s clear that the film is trying desperately to be the new Taken and whilst Cage proves that he certainly has the strength to be some competition for Liam Neeson, his talent is wasted here. With some appalling supporting cast including a truly awful taxi firm controller whose accent and humour are just dreadful; and an Australian tourist character who makes Tarantino’s Django Unchained cameo look Oscar worthy.

But don’t let this put you off. Although, it is downright insulting to movie goers, you can still watch it and not feel as though you’ve wasted your time too much. The trick is to go in and simply laugh at its pitiful attempt at entertaining you. Laugh at its awful dialogue and even worse editing. And let the laughter drown the sobs of disappointment at what Stolen could have achieved if anyone, but Nicholas Cage, had actually bothered to try their best with it. All while thinking of the people in the screen next door watching Cage in The Croods and actually enjoying themselves.