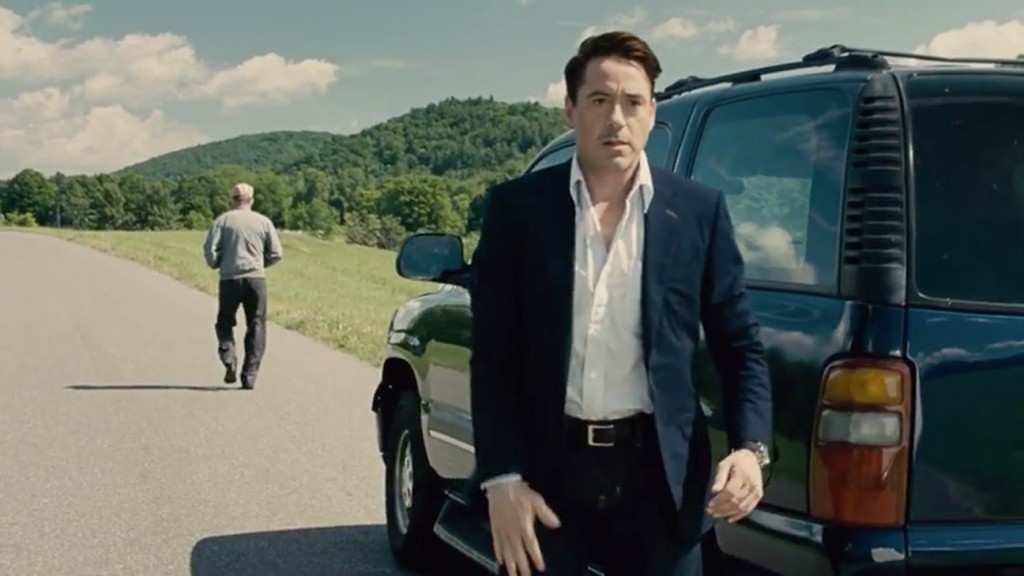 If we say that watching a film is like inviting a bunch of people into your house for a couple of hours, then you’d probably think you’re in pretty good company when it came to ‘The Judge’. Let’s set aside the fact that this simile is pretty pointless and unhelpful and extend it further than the characters on the screen, to the filmmakers behind the lens, well then ‘The Judge’ is still doing pretty well.

First off, in this inexplicable gathering of people, you’ve got Robert Downey Jr. and Robert Duvall, these guys are party lynchpins, they’re magnetic and entirely watchable in pretty much every party they’ve ever been to. On top of that you’ve got Janusz Kamiński, a cinematographer with a pretty unbeatable back catalogue of party attendance. A rung lower down and you’ve got Vera Farmiga, Billy Bob Thornton, Vincent D’Onofrio, good supporting cast members for your film/unwieldy simile party. A bit lower down roster there’s director David Dobkin, guilty of such crimes as ‘Shanghai Knights’, ‘Fred Claus’, ‘The Change-Up’ and, to a lesser extent, ‘The Wedding Crashers’. This is where you hit a bit of shaky ground; Dobkin’s the kind of guest that wouldn’t make you call the whole party off if he texted you the night before to say he couldn’t make it. Then there’s the novel the film’s adapted from, written by John Grisham. Based on recent comments, Grisham might be that guy you just ‘forgot’ to invite.

There’s no doubt that this party’s been arranged with a view to the party awards in January, you know Oscar’s party that he has every yea- oh forget it. But whilst the cast is, on paper, Oscar material, Dobkin’s past work has rightly not seen him even close to a nomination and, so far, no-one’s scooped up a tiny, bald golden man for a John Grisham adaptation. The Judge is unlikely to buck this trend either, as it rarely strays far from unremarkable, save the odd misguided and puzzling digression.

The set-up for the film bounces back and forth between Standard Grisham Fare to just Standard Fare. You’ve got a small mid-western town, a wood-panelled courthouse, spectators gasping in the gallery, lots of ‘objection’ and ‘overruled’ bandied about, and the lawyer who wears a beige suit complete with red and blue tie. Then we get to the characters: there’s the smug, smart aleck, amoral big city lawyer, trying to sever his small town roots (Downey Jr.); there’s the stoic, authoritarian father who’s emotionally unavailable (Duvall); the recently deceased mother who’s impossibly idealised; the Forest Gump-style younger brother (Jeremy Strong); the now overweight, ‘shoulda been a pro ball player’ older brother (D’Onofrio) – together they’re the three brothers that all used to go fishing with Pop on the lake: Come on! Really? There’s also the slick antagonist lawyer who’s actually described at one point as a “snake oil salesman”(Bob Thornton) and the ex-girlfriend who never left town, who now owns the old bar and the old diner, and whose life apparently just went on pause after Downey Jr.’s character left town twenty years ago.

All this adds up to almost exactly what you’d expect: a shrug of the shoulders and a half smile at best. It plods along with a kind of funny bit there, a kind of heart-warming bit here, then maybe a sad bit, then some Courtroom Drama stuff, and all the characters say all the things you’d expect them to say, like, “I didn’t need help, I needed you!” There’s also some sub-par Sorkin shtick buzzing around in the background that Downey Jr. does with his eyes closed. They even go for that mushy ideological dialogue that Sorkin put into ‘The West Wing’ but can’t really pull it off, as when Thornton’s character explains to Downey Jr. that, unlike him, he believes “Law makes everyone equal.”

Roughly two thirds of the film, then, is so far so-so. But the other third is borderline bonkers; a slew of different genres haphazardly and uncomfortably collaged together. There is one particular comedic sub-plot centred on incest that is just incredibly misjudged and downright weird. Aside from that there’s odd little ticks and moments that just seem out of place. A couple of lines of dialogue from Farmiga at the end of a scene, in which her and Downey Jr. end up not getting it on, that are so bizarre and unnecessary that it’s as if the filmmakers shoved them into confuse rather than disappoint the audience.

As for the genuinely good stuff, Downey Jr. and Duvall are perfectly fine in their roles. It’s hard to praise them anymore than that though, because you never feel they bring their A-Game, it’s just that their B-Game is still very watchable. All the scenes with the legal assistant, played by Dax Shepard, are pretty good. Shepard’s character, who owns an antique shop, and vomits before going into court is done well and his character is a good foil to Downey Jr.’s lovable, arrogant jerk. But even then, you are praying for someone like Joss Whedon, Shane Black or Aaron Sorkin to be the guy giving them the words. The scene in the shower (no, not like that) has been reviewed by some as cynical Oscar bait and by others as incredibly touching. It’s probably both those things, with Downey Jr. and Duvall briefly shifting into first gear to save the scene’s credibility.

Dobkin can say, at least, that he’s bridging that gap between him and that Oscar, and it will be interesting to see whether he reverts back to trashy comedy or carries on in this vein. As for the cast, Downey Jr.’s not going to make it with this one but he’s not thrown himself too far off course either, and Duvall might have an outside shot at a supporting actor nomination. At a running time of one hundred and forty-one minutes time doesn’t exactly fly by. It would be unfair to say you’ll regret spending so much time with Downey Jr. and co., but it’s probably not a group of people you’ll want round again anytime soon.

‘The Judge’ is in cinemas now.