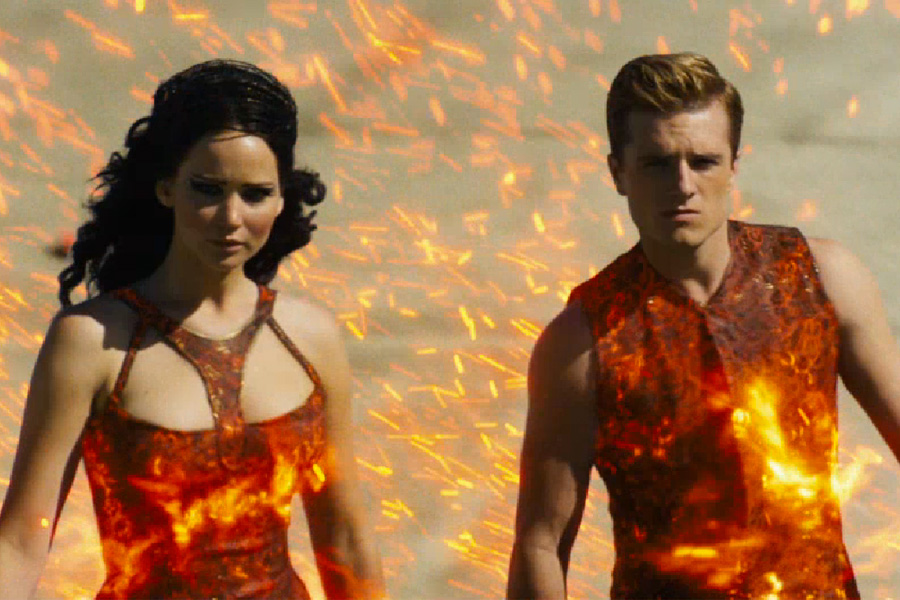 ‘Catching Fire’ pulls no punches in this spectacular, action-packed follow up to one of the best films of 2012.

There’s no denying ‘The Hunger Games’ was one of the best films of last year, leaving me in awe, and thinking “I need to see the sequel to this.” Yet as good as the first movie was, I couldn’t help thinking that a sequel was in danger of being formulaic, much like the second ‘Hangover’ movie felt for me. It’s safe to say that ‘Catching Fire’ goes above and beyond its predecessor, taking everything we loved about the first movie, and doing more than enough to keep it feeling new and exciting.

Following their victory in the 74th annual hunger games, Katniss and Peeta return home but now everything has changed and a rebellion is brewing in the districts. Not only that but when the announcement comes that the tributes for the 75th hunger games are to be drawn from previous victors, Katniss and Peeta find themselves experiencing a horrible case of Déjà vu.

‘Catching Fire’ has you on the edge of your seat, grabbing you almost instantaneously when Katniss is haunted by her past and from then on, we are swept into a dystopian battle of fear and hope, the latter of which Katniss now unwillingly stands as a symbol for; her actions hold great consequences for the lives of those around her. Catching Fire has a dark tone for the most part; the previous hunger games were “child’s play” in comparison to facing the “all experienced killers” this year, not to mention the backdrop of increasing tension in the districts. This tone is broken up perfectly with action, the growing relationship between Katniss and Peeta, (and even a few laugh out loud-worthy jokes) and executed with flawless acting from nearly all characters.

In essence, ‘Catching Fire’ is a Battle Royale-esque movie, resembling the first but at the same time constantly driving the story forward to an incredible, and just down right unfair, cliffhanger that’s going to leave fans hungry (pun very much intended) for more. Although there is only one more book in Suzanne Collins’ trilogy, the third instalment will be broken into two parts much like ‘Harry Potter and the Deathly Hallows’ and ‘Breaking Dawn.’ With such a game-changing cliffhanger, I’m very excited to see what is in store for Katniss Everdeen and the fate of the rebellion.

As an action film, it’s safe to say the visuals don’t stand up to the likes of ‘The Hobbit’ but I don’t think this is hugely important; the movie still looks great and the story and acting are more than enough to immerse you in the story. It’s noteworthy that, though the film is stunning and satisfying to Hunger Games fans, the film may be hard to follow to anyone who hasn’t seen the first film, although having said this, they would still undoubtedly enjoy the action, and the film does open by re-capping previous events.

All-in-all, ‘Catching Fire’ is one of the best films I’ve seen in a while and definitely up there as one of the biggest films of the year; a very satisfying movie that drives the story forward to an almighty cliffhanger. ‘The Hunger Games: Mockingjay- Part 1’ is scheduled for a November 2014 release date, and will definitely be one to look out for.