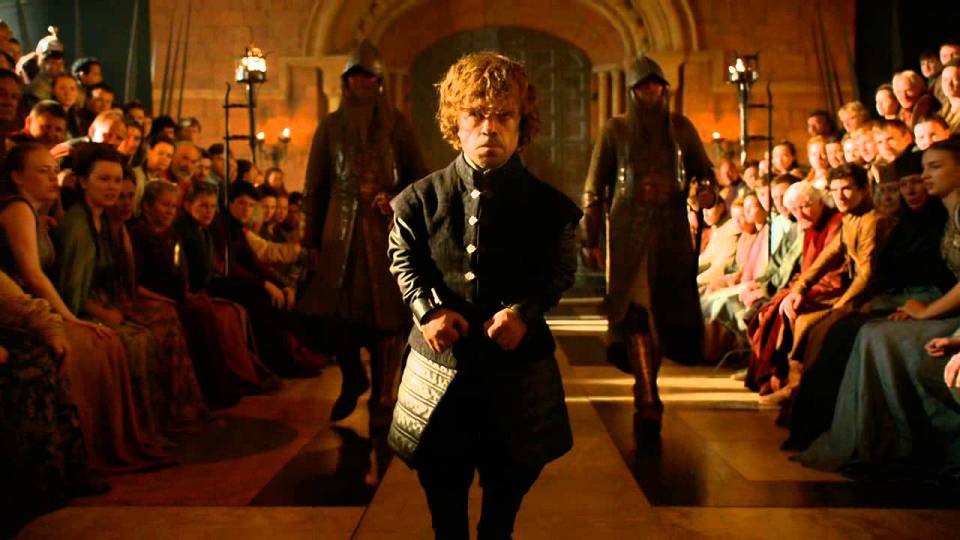 It’s the moment we’ve all been waiting for, and nothing goes to plan. Read on for my review of episode 6: The Laws of Gods and Men.

We finally see the much anticipated trial of Tyrion Lannister but of course you have to wait as the episode is effectively split in two halves. The first half follows several characters’ story lines whereas the latter is the 20 minute long regicide trial.

The first of these is Stannis and Davos, who travel to Bravos, a corner of the world we have heard much of but never seen with our own eyes. And it’s pretty nice, complete with a huge statue. The iron bank turns Stannis down quite rightly, but Davos changes their mind with his art of persuasion, showing us his chopped of fingers as proof that Stannis pays his debts. And everyones favourite pirate- Salladhor Saan is back, telling classic pirate jokes.

We finally see Theon’s sister attempt to save him. That was a long time coming. She rallies up her shoulders with this big speech… only for Theon, sorry- Reek, to cower in a corner and whimper. As they escape, we hear Yara say ‘my brother is dead’ by dead she means completely gone, and she’s right because this proves just how broken Theon really is.

I’ve got one word for you- dragons, big freaking dragons. They are getting seriously big, and terrorising farms. The farmer who’s sheep were killed isn’t the first victim of Dany’s harsh ruling; we start to see the negative repercussions of her decisions. For every vanquish she makes over evil, it seems loads of lesser evils crop up. It’s certainly something to think about.

Tywin and the council plot to dispose of both Daenerys and The Hound. Uh-oh.

And now onto the major highlight of the episode, and the second half. From the get go, Tyrion is treated like filth. Tyrion initially responds with classic Tyrion humour, but at the same time there is a brokenness in his tone, when he responds ‘or the pigeons, just leave me out of it,’ or a plea that reflects just how cruel and unfair his treatment is and the inevitable outcome. It’s like he knows he is doomed and there’s nothing he can do.

Then cue a stream of completely biased and fixed evidence from various people, the last of which is Shae. Jamie accurately sums up the trial as a ‘farce,’ and tries to do what he can, taking one for the team and negotiating with Tywin. Tywin’s power and bitterness is perfectly reflected in this episode. He sits the throne in Tommen’s stead for the trial, but Tywin sitting in the iron throne is clearly representative of who’s really running things behind the scenes. And if all went to plan, Tyrion would have been transferred to the wall to live out his life wearing the black. This may have occurred but Shae’s appearance and lies completely breaks Tyrion. His expression turns from pleading, to overwhelming pain, and finally to rage, as he unleashes all the pain and suffering inflicted on him in his life, shouting that he wished he had killed Joffrey, and all the people. Tyrion’s speech was absolutely incredible, and without a doubt the best acting on the show, and that’s saying something. Tyrion finishes by demanding a trial by combat. Not exactly conclusive; I’ve never been more impatient for the next episode and to find out Tyrion’s fate.

Without a doubt, one of the best episodes on the show, along with probably the most provocative and moving acting. An incredible episode, with a mindblowingly epic ending.