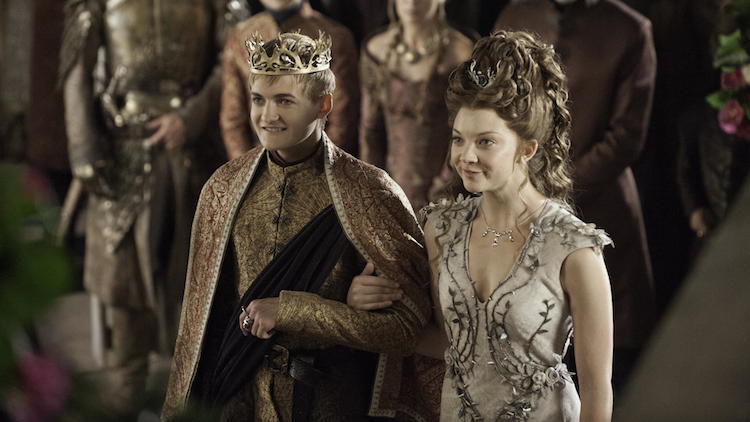 Another wedding, another insane episode of Game of Thrones. Read on for my review of episode 2: The Lion and the Rose.

Warning: Major spoilers to follow. Do not read before watching this episode.

Episode 2 narrowed its focus after the season premiere and really set the pieces in motion. There was no Daenerys, Ygritte, Jon snow or Arya in this episode, but we saw several plot threads that the premiere missed out; Stannis, Theon and Bran, as well as the main focus of course being the royal wedding.

So Theon’s back and he’s er.. very different. He’s even referred to as Reek by Ramsay Snow to match his new identity. Theon is an interesting character; we went through most of season 2 hating his guts, then kind of feeling sorry for him throughout season 3, and now he seems completely devoid of all emotion and has become a zombie through incessant torture. This was illustrated by a scene in which Theon AKA Reek shaves Ramsay’s beard. Honestly, having a sharp blade against the neck of the man that cut your manhood off and not cutting that bastard’s (i’m allowed to use that bad word because it’s true) throat is proof enough that Theon is  hollowly faithful. It’s always possible that Theon is just waiting for the right moment though, and Game of Thrones in true fashion keeps us on our toes with some tense moments. (More of that later, wink, wink)

So Stannis made his first appearance this season too and as always he’s hopelessly blinded by the red woman who even has his wife in her clutches now. Stannis’ wife seems perfectly content burning her brother for refusing to take the new Gods. Nice, right?

Bran continues his path towards Jon Snow, the reunion of which I cannot wait to see, but his powers seem to be getting the better of him and we see some epic prophetic visions when he touches the tree.

It’s all good stuff and I can’t wait to see where most of the plot lines take us but let’s get to the meat of this episode- the purple wedding. Who saw that coming? Apart from everyone that’s read the books, and everyone that had it spoiled for them, and a fair amount of people that guessed it. Okay so it was still super badass and shocked me even though I knew it was coming. I’m not going to get into the whole whodunit because there are 1001 articles on the internet discussing that issue and if you really want to know, you can look up spoilers from the books but as of yet I don’t know but my money’s on Margery or Sansa, though i’m probably wrong. Either way, it’ll be sad to see Joffrey gone, much as everyone hated his guts and I have to admit I felt a shred, just a shred, of sympathy for Joffrey as his face distorts and he’s coughing up blood surrounded by his twincestual parents. Although Joffrey’s death wasn’t quite as big as the Red Wedding, this is the first time in ages since the whole world has been completely shaken up. It’s pretty safe to say that King’s Landing is going to be pretty different now that Joffrey’s gone.

Episode 2 was crazy good, the best since the Red Wedding in my opinion. And hell, that was only the second episode? There’s good stuff to come, i’m sure of that. Check back next week for my review of episode 3.