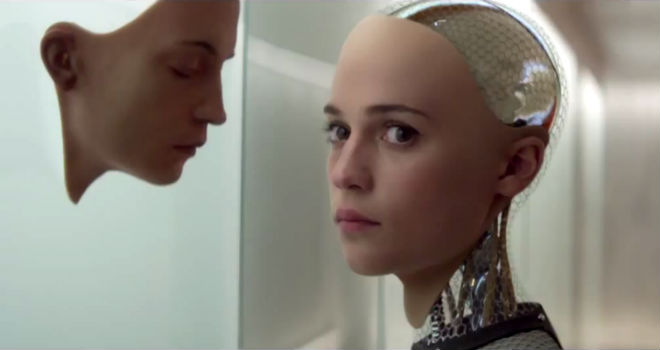 In November 2002, Alex Garland wrote the script for a British post-apocalyptic horror film called 28 Days Later. The film was a hit both at the box office and amongst critics, receiving praise for reinvigorating George A. Romero’s zombie horror movie genre. Its success spawned a sequel and even a graphic comic book series. One such comment by website Bloody Disgusting gives equal amount of compliments to the film, saying that “it so expertly balances scene of white knuckled, hell-for-leather horror with moments of intimate beauty.” So when Alex Garland announced he was making his directional debut with Ex Machina in addition to writing it, I knew I had to see this.

The film follows a computer coder by the name of Caleb – played by Domhnall Gleeson – who works at a search engine company called “Bluebook”. He wins first prize in a competition to spend a week with Nathan, the CEO of the company – played by Oscar Isaac. What Caleb first expects is to maybe spend a week with Nathan and hopefully get a promotion if he plays his cards right. However, he very quickly discovers that this is not the case, as he is actually there to take part in an experiment to test for artificial intelligence in a humanoid computer called Ava – played by Alicia Vikander. This whole thing is described by Nathan as being “the greatest scientific event in the history of man”. However, as the week progresses, Ava starts to warn Caleb about Nathan, instilling a sense of paranoia within the young programmer.

The film as a whole is pretty good. As a directional debut from a renowned writer, it is a brilliant first attempt. It is a very pretty movie; the cinematography is beautiful and very artistic. The set location helps with this a lot, as it’s based in a home/ research facility in the middle of a forest surrounded by mountains, so the natural beauty of it all is a massive benefit to the film’s aesthetic. From an interpretational point of view, some of the symbolism is a bit in your face at times, like red means danger. The plot was interesting, however, for Alex Garland, I felt like he could have done a little bit more with such an interesting premise.

The soundtrack is phenomenal. I am a sucker for good music in films and games, and I fell in love with the music. Composed by Ben Salisbury and Geoff Barrow – who have worked together on more than one occasion – it is one of the film’s most enjoyable aspects personally.

There is also a very limited cast to this film. With only three main characters, an additional secondary character, and only maybe a couple of dozen of background characters, I’m a little surprised that a movie like this has such a limited crew in front of the camera. The performances from the main characters are, sadly, a bit underwhelming compared to what I was expecting. Alicia Vikander’s portrayal is very bland. However, considering the fact that she is playing a robot, I’d say she gave an exemplary performance. Domhnall’s character is a bit boring at times and, though the film focuses on him the majority of the time, I didn’t really enjoy much of his screen time. However, undoubtedly my favourite character is Nathan. Both in writing and performance, he is rather different to his portrayal in the trailers and has a wide range and spectrum of emotions, ranging from charismatic and entertaining, to deep and intelligent.

The only serious apprehensions I have about this film are two scenes in particular. One of them is downright bizarre and the other is at its best uncomfortable and at its worst triggering and unnecessarily dark. If you went to see the film, you’d understand which scenes I am talking about. It is debatable that the first of these scenes helps bring comedy to an otherwise humourless film, but both do little to nothing to advance the plot. If both these scenes got written out of the film, it would have literally changed nothing, and maybe even made it better.

Overall, I enjoyed this movie immensely. I went in, expecting it to be a real life version of Ghost in the Shell, filmed in the style of 28 Days Later. It didn’t feel like that at all. The whole film centers around an advanced version of the Turing test with a lot of philosophy and interesting AI concepts. For Alex Garland’s first movie, it is an exceptional first attempt. It wasn’t exactly the film I was expecting it to be, but for the first movie I have seen at the cinemas in 2015, it wasn’t a bad choice. Definitely not the best film ever, but it is a long shot from the worst.