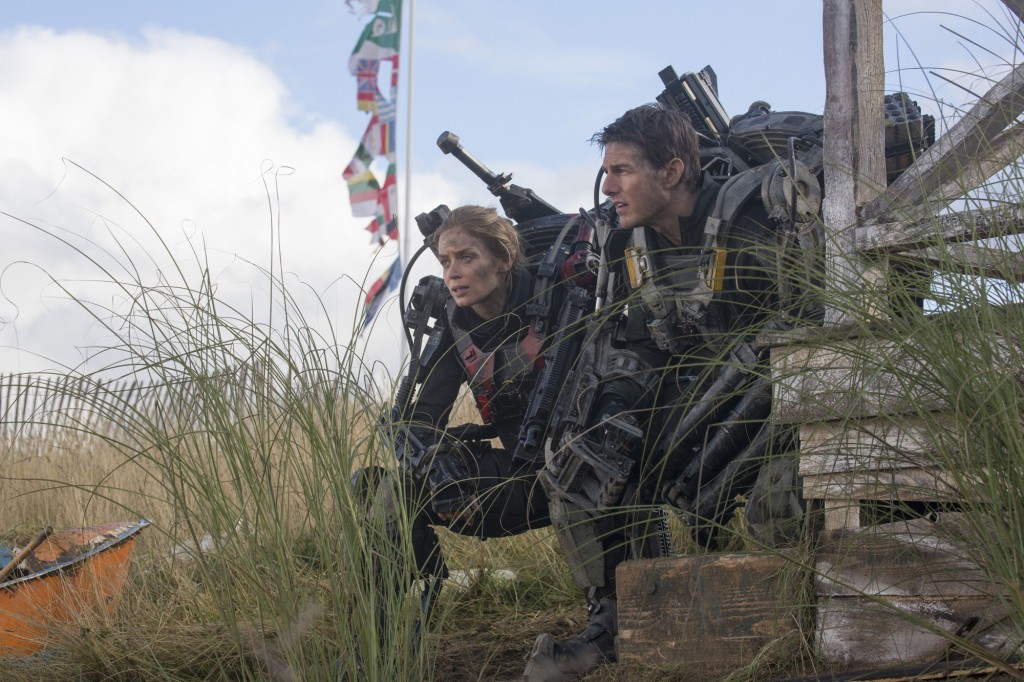 Based on Hiroshi Sakurazaka’s novel All You Need is Kill, Edge of Tomorrow takes us into a not too distant future in which humanity is struggling to defend itself against an alien race known as The Mimics.

Tom Cruise is William Cage, a Sergeant Major for the US Military. He is a man very keen to promote the fight through media outlets, but just as long as he isn’t actually part of it.

Unfortunately for Cage, his cowardly stance quickly land him in the one place he fears most, the frontline. Caught in the chaos of the battlefield, Cage meets a sticky end with a particularly fierce mimic, but finds himself waking up 24 hours earlier, an experience he starts to become very used to.

Cage meets Rita Vrataski (Emily Blunt) on the battlefield, and quickly realises that she is his only hope to figuring out his peculiar circumstances. Rita has established herself as one of the war’s standout soldiers, and her entire look is really quite something, very reminiscent of Japanese Anime and Manga, with her long sword crafted from a propeller blade, and her refusal to wear a helmet in combat.
The two form an alliance, and Rita helps Cage use his ability to their advantage, as a means to ending the war. She acts as the catalyst that allows Cage to become the type of character we expect of Cruise, training him to become an effective soldier and to find the enemy’s weakness.

The theme of repetition surprisingly never gets too annoying because it works on a level of assumption and intelligence from the audience, a directorial choice that is commendable. The time loop is instead used as a tool to push the story further along.
The decision to set the action primarily in London and Paris in a non-post-apocalyptic world gives it a grittier and more believable feel, and the world feels far more grounded and authentic than what you may expect. The exo-suits worn by the soldiers during battle are used as a vehicle to highlight Cage’s transition from being a cowardly and vulnerable deserter to a battle-hardened soldier who can hold his own. They’re also pretty awesome in a fight.

Edge of Tomorrow has clear influences from a number of sources, in both films and videogames, such as Starship Troopers and the Call of Duty series. The movie’s tag line; LIVE. DIE. REPEAT. Is evidence of this, as Cage uses each experience of death as a means to figuring out how to progress further within the story, whilst many of the aesthetics and camera techniques used throughout feel like your watching a videogame.

Blunt and Cruise work well together onscreen, and the way their relationship grows is credit to the pacing of the writing. Edge of Tomorrow isn’t a Science Fiction movie that will pose any philosophical questions about our future as a race; rather it is evidence as to one of the fundamental reasons we continue to watch movies on the big screen, because we crave the spectacle that cinema can create.

Overall, at the centre of this concoction of sci-fi and action influences, director Doug Liman has achieved a Summer-blockbuster that is enjoyable and very fun to watch, whilst Christopher McQaurrie and Jez Butterworth’s screenplay never attempts to do more than it needs to.