Review: Doctor Who – The Day of The Doctor 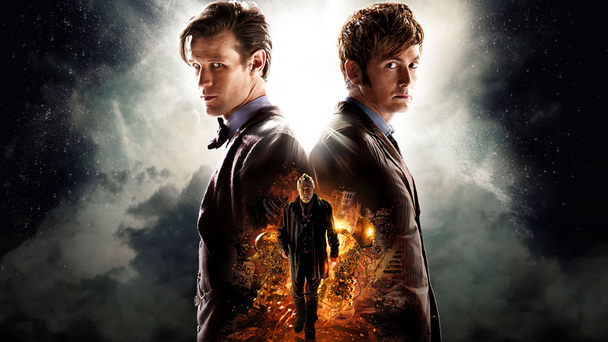 When your recipe for a 50th Anniversary episode includes David Tennant, Matt Smith, John Hurt, Jenna Coleman and Billie Piper it’s pretty unlikely that a lot is going to go wrong, not impossible – just pretty unlikely. As it turns out, it was impossible as what ‘Whovians’ all over the world were treated to last night were 76 minutes of absolute perfection.

It’s quite ironic really that the weapon the plot should be centred around was called ‘The Moment’ because this indeed was the moment that Doctor Who fans all over the world have been waiting for since the show returned to our screens in 2005 – what actually happened in the Time War? Well, having watched the episode it’s safe to say fans finally get a lot of the answers they’ve been waiting for!

I should probably mention that from here on in there’s going to be spoilers so if you haven’t watched it yet and just wanted to get the gist of how the episode goes then I hope I’ve helped a tad with that! I strongly recommend you now navigate your way over to BBC iPlayer through this link and in 76 minutes come back and tell us how blown your mind is!

The story itself follows the War Doctor (John Hurt) as he initiates his plan to end the Time War using the most powerful weapon in the Universe, the Moment. The reason this weapon is so dangerous though is because it has a consciousness (Billie Piper) that challenges the War Doctor about whether this killing is necessary by showing the Doctor his future if he goes through with his plan.

The War Doctor, The 10th Doctor (David Tennant) and the 11th Doctor (Matt Smith) are then brought together in 16th Century England to kick off what is arguably one of the greatest on-screen segments that the Doctor Who franchise has ever produced with plenty of timey-wimey, Cup-a-Soup, sand shoe banter adding a lot of humour to some otherwise quite intense sequences where the War Doctor tries to extract from his two future incarnations, what exactly the consequences are going to be if he goes through with his plan to destroy Gallifrey. All this is set against the backdrop of a plot by the Zygons, appearing for the first time in Doctor Who since 1975, to hide in paintings in the 16th century before emerging in the 21st to try and take over the planet.

Using typical Timelord heroics, the Three Doctors foil the Zygon plans before the War Doctor returns to the Moment with his decision made to go through with destroying Gallifrey; the 10th and 11th Doctors decide to go to the Moment and that the three of them should end Gallifrey together before collaboratively coming up with a plot to potentially save their planet and destroy the Daleks at the same time.

Not knowing whether or not their plot has worked or not, the big question surrounding this iconic series since its return changed in an instant from what happened in the Time War to where is Gallifrey now and if the episodes to come are anything like the quality of the ones we’ve been treated to in the last 50 years of Who then long may it continue. The Day of The Doctor is a fitting tribute to the history of this iconic series; the humour, the drama and the emotion were all present in abundance in what was arguably the best episode of Doctor Who that has ever been produced.