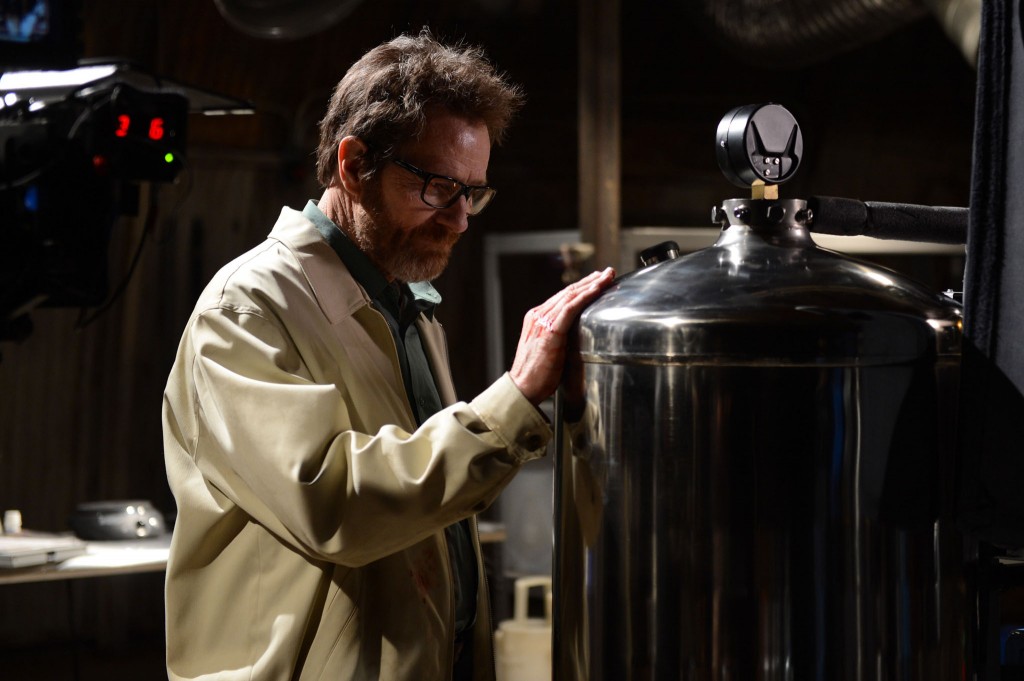 This week we broke bad for the last time: the show that launched a thousand chemistry A-levels came to an end.

Last week the writers (specifically Peter Gould) cast Walt into the snowy wilderness of New Hampshire, rendering him unable to exert any influence on his family’s dire situation.  This week Vince Gilligan bought Walt back from the abyss, to Albuquerque, still driven by the desire to exact revenge on the new meth operation in town and secure his family’s wellbeing.

First stop on the road trip of revenge: Gretchen and Elliott. Despite it being rare for Walt to make designs upon enemies involving a simple, unimaginative butchering, there was a real Kubrickian sense of violence, as the Schwartz’s unknowingly let Walt into their home and the orchestral music played on in the background. But, true to form, Walt had no intention of harm; instead he had devised a way to get money to his family using the (entirely fabricated) threat of violence to ensure Gretchen and Elliott’s co-operation.

Second port of call was the White family home, referring us back to a flash-forward seen in this season’s ninth episode and Walt’s acquisition of the ricin, that many assumed to be Walt’s method of suicide. Walt then tracked down his family for a final goodbye, the emotional centre point of the episode.

Skyler appeared entirely numb and depleted throughout her conversation with Walt, only animated by Walt’s admission that the main motivation for his crimes was the desire to satiate his own needs. What originated as a crime of a means quickly transformed into the only means Walt had to feel “alive”. The sense of caution that characters such as Gus and Mike had always exhibited around Walt, emanated from an instinctive understanding that something deep inside of this nebbish high school teacher was addicted to danger, chaos and domination (and chemistry). Gilligan then took a moment to keep his protagonist three-dimensional, as he bade goodbye to his daughter and caught one last glimpse of the son; once unconditionally idolising, now full entirely of hate for his father.

Finally there was the showdown, Walt’s last attempt at a criminal masterstroke to finally tie things up. We’ve seen countless schemes over the five seasons whether it’s attempting to poison Tuco, steal a drum of methylamine, wipe a hard drive with an oversize magnet, explode the face off Gus or simultaneously assassinate several potential slammer-dwelling threats. Each scheme has had repercussions that have led to more schemes but this one had to be different. Walt couldn’t allow any loose ends, including himself.

Motivated by Jack’s theft of his life’s work and subsequent partnering with/ indefinite imprisonment of Jesse, Walt devised perhaps his dodgiest plan of all. However the weight of the episode didn’t really allow us to acknowledge the ramshackle humour, instead we were caught in suspense wondering whether Walt could position his remote controlled gun effectively and get to his car keys without arousing suspicion.

Once he saw the state of his former protégé, Walt realised he couldn’t kill Jesse. There had been no betrayal; Jesse was frightened, haggard and praying for the mercy of death. Walt determined that he had to free the man who, at various points in his life, has acted as his spiritual son, brother and spouse; possibly the most significant person in his world. And Walt broke the showdown with a ruckus. Having done away with Jack, and Jesse taking care of Todd, there was a moment of dark humour as Walt informed Lydia that it was “done” and he’d slipped some ricin into her tea for good measure.

Those who had strayed furthest from sympathising with Walt in recent seasons must surely have turned somewhat as he took in his lab for one final time, and Badfinger’s Baby Blue fired up. Walt’s ability to marvel and appreciate the art of chemistry gives him a charisma that makes it hard not to root for him. The choice of song, mixed with Cranston’s performance, gave a wry tone to these final few minutes. It was as if Walt had taken stock of everything and was almost content to concede that he had paid the ultimate price for breaking bad.