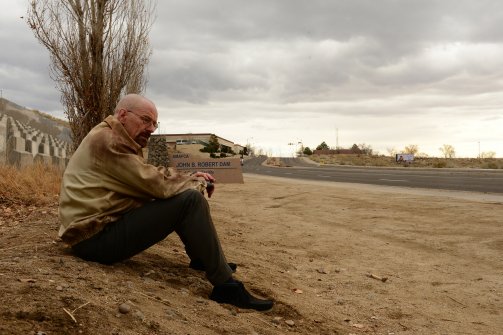 This week’s episode was arguably the best of the series so far. Whilst last week’s probably had Twitter and the message boards in more of a frenzy, I feel that the fallout from a cataclysmic event is exponentially more interesting than the event itself.

Episode 14 kicked off with one of the greatest uses of fading ever seen (no I haven’t got a top ten). First we saw a flashback of Walt at the point of conception; that first lie to Skyler. It didn’t come naturally, he had to rehearse and work himself up to it. It raised a lovely question; what makes someone a master of deceit? Is there something innate? Not in this case. All it really took was a little bit of time. Cue the fading out of the flashback and fading in of the climax to last week’s episode.

As the dust cleared, we saw that Steve hadn’t made it. We’ll miss his slightly awkward but strangely effective performances. Hank followed shortly after with a final line of dialogue that broke hearts: “You’re the smartest guy I ever met, and you’re too stupid to see he made up his mind ten minutes ago.” In the space of a few episodes we’ve seen all traces of the loving, sensitive side of Hank washed away by a bitter desire to topple his shiny-headed brother-in-law. But all that dissipated, as we caught a final glimpse of sensitivity and admiration for Walt, reminding us how distraught he must have been when he picked up that copy of Walt Whitman. Later on we see a tragically smug Marie in an encounter with her sister that is just unbearable to watch, as all the while we know it’s just a matter of time before her sense of victory is extinguished.

On to Walt, and I’d like to go on record as saying that this was, for me, Bryan Cranston’s greatest outing as Walter White. He’s rightly received numerous plaudits already, but here was an actor really excelling like never before. There was a quality in Cranston’s performance that we hadn’t seen before and it’s still hard to figure out quite what it even was. It was something like a mixture of desperation, confusion, malevolence, fear, uncertainty, disbelief and resignation all working together, culminating in an exhilarating phone conversation with Skyler at the end of the episode.

Raised a Catholic, series creator Vince Gilligan has always enthused the show with themes of sin, evil, punishment, judgement, penance, and redemption. This week he leaned more on the idea of Walter as the Devil. What Gilligan and Cranston have managed to do over the course of the series is ask a tremendously exciting question through the prism of Walt’s character. What if the Devil didn’t know he was the Devil? After all, he used to be an angel. On top of this they’ve raised the idea that Walt’s biggest lie, or most dangerous, is the one he tells himself; that everything will work out. That he could cross certain lines but every time he would be received lovingly by his family. He didn’t believe for a second that Skyler would ever use that knife; he always convinced himself that he could ‘reason’ with her.  It’s arguably his greatest flaw and sin (that, and all the killing people).

Heading into the final two weeks, it’s recently been confirmed that the last two episodes are to be extended by roughly fifteen minutes each. I for one am grateful I get a bit of extra time before my life stops making sense again.