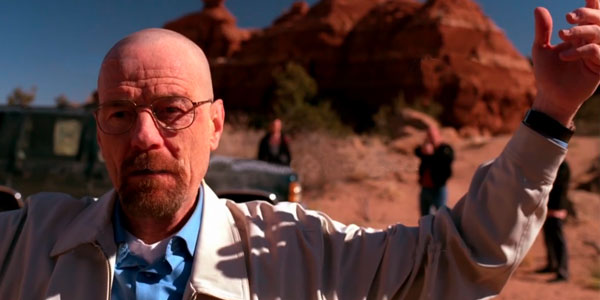 OK, OK, everyone just calm down, let’s all just take a moment. We all saw this coming really, didn’t we? We’d all done the math(s), hadn’t we? We’re on the 13th episode of a 16-episode season; something cataclysmic had to occur to make way for the grand finale. No, you’re right, there’s just no preparing for it.

This week’s episode was called To’hajiilee, and it was really all about the climax that was spent on the Native American reservation, everything else was just build-up. We started with another little vignette shared between Todd, his uncle and Lydia. I’m becoming increasingly obsessed with Todd. It’s like he’s some kind of android struggling to adopt our human notions of empathy, feelings, or just basic human response, and each week he gets a little bit better at it. This week he felt the rim of a cup that Lydia’s mouth had touched; I guess that’s classified as progress.

Walt was his usual; sanctioning a heinous act whilst rationalising to himself and those around him about why it’s not that heinous/how to make it less heinous/ why it just has to be done/ a combination of the three. “He’s not a rat he just wont listen to reason … he’s just angry,” says Walt, shortly before going on to use vermin/pest-related imagery (“I know how to flush him out.”) himself in conjunction with Jesse.  He keeps going on about having too much money to spend but the amount of therapy he needs could comfortably put a dent in it.

So let’s move straight to the bit of the episode that had everyone having to pick his or her jaw up from off the ground. As Hank got Walt into the sights of his pistol and beckoned him forwards, each step became a thousand beats of the heart. I almost couldn’t contain myself from shouting out defiantly, “THIS CAN’T BE HAPPENING! I’VE SEEN THE FLASHFORWARDS: HE’S GOT LONG HAIR AND IS DEFINITELY NOT IN PRISON!” But it was happening and my heart was beating faster than you could say To’hajiilee (OK a lot faster than you could say To’hajiilee – OK seriously, stop trying to say it). And then my heart wasn’t beating at all. Minutes after they had slammed the cuffs on Walt everything had frozen because Hank was on the phone to Marie. The two of them had massive smiles on their faces, they were telling each other how much they loved each other and you could almost physically see the relief wash over the two of them, as they felt a horrible chapter in their lives draw to a close. This could only mean one thing: Hank was about to die. The fact that Hank seems to be alive at the end of the episode gives him slightly better odds of survival, but I wouldn’t hold your breath. The tragic irony of having finally got his life back on track, only to have it snatched away moments later seems far too in keeping with the series up to this point.

Where we go from here is, as always, anyone’s guess. But who cares for speculating? This is one of those rare instances in life where the reality will be better than anything you could possibly try and predict. Having said that, next week’s episode is entitled Ozymandias, and we all know that didn’t end in glory.