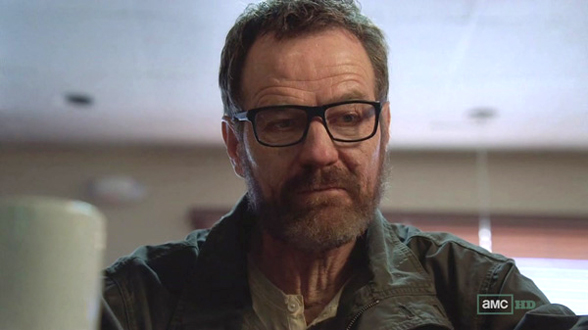 Breaking Bad has returned for its final run of episodes, with the focus of season five’s ninth episode being Hank’s discovery of Walt’s crimes. We also get the feeling, not for the first time, that Walt has lost all prospect of salvation. The gradual progression from Walter White to Heisenberg is undeniably complete: no longer do we see the smiley-faced blond kid in Tatooine, but a fully-fledged, asthmatic, helmet-wearing villain.

Series creator Vince Gilligan took the opportunity to hint once again at the story’s inexorable tragic conclusion. One of the series’ signature flash-forwards shows a Walt, perhaps totally cancer-free, revisiting his family home that now appears to exist as an abandoned, derelict testimony to a horrific scene we are yet to witness. This was also a lovely reminder of the trailer for the show’s final run, in which Bryan Cranston reads Shelley’s Ozymandias over a compilation of Albuquerquean landscapes.

It seems a tad redundant to talk about the gut-wrenching pace each season has to it. Although, having said that, even after just one episode there is the feeling that the characters are now on a conveyor belt they can’t get off. Whereas before, the show generated a haphazard momentum from the active scheming and botched antics of Walt and Jesse, we now have a sense of the inevitable. As if Gilligan has meticulously assembled these frantic moving parts into their intended positions, so all that is left is for it to just play out.

What has always been most striking about the show is its persistent self-assured attitude, in spite of it being such a risky piece of television. The final scene of the last episode in particular probably looked like a minefield on paper, with Hank having to come to terms with some earth-shattering truths in the space of barely episode. And yet the whole thing was executed with such confidence. I mean really, I could watch Walt and Hank go head-to-head everyday. They wouldn’t even have to be making any sense, just simply saying words and staring each other out would be good enough for me. The moment where Hank suddenly can’t recognise the man standing before him, and the subsequent response from Walt, warning his brother-in-law to “tread carefully”, was chilling. It’s in snippets of dialogue like this that Breaking Bad lifts itself into the higher echelons of television, alongside The Sopranos and Deadwood: when a few exchanges simultaneously tells you about the characters, alludes to previous events and foreshadows those to come.

This leads me to what was perhaps the episode’s greatest scene, as the unscrupulous Walt shamelessly attempts to convince Jesse that Mike Ehrmantraut is alive and well. Lying to Jesse is not a new move for Walt but it was the desperation and the subject of the lie; convincing the closest thing he has to a friend not ‘to do right by’ Mike’s granddaughter. It’s another reminder that Walt is no longer a good man committing or rationalising bad deeds but a bona fide malefactor. Walt constantly implores Jesse to believe him, as if it could offer him some form of redemption. Generally, as an audience, we’ve allowed Walt to lie to Skyler and Walt Junior, in order to preserve their innocence, but lying to Jesse seems unforgivable and more manipulative

Jesse has seemed a bit one-dimensional recently, as his seething resentment towards Walt burgeons. Despite being perhaps the most good-natured character in the show, Jesse’s uncooperative and combative attitude towards Walt has forced us, as the audience, to marginally dislike him at times, with the show written in such away that we naturally back Walt to some degree. It is true that characters that can sometimes be called the ‘conscience’ of a story get whitewashed as a bit ‘moany’ or ‘mopey’, but there will obviously be a more complex role in store for Jesse in the coming episodes. He seems to be simmering up to something big and it may well be he, not Hank, who brings Walt’s world crashing down. Whatever chain of events leads to it, we are not far off the time that Walt’s “works” consists of nothing more than a “colossal wreck” and “lone and level sands”.