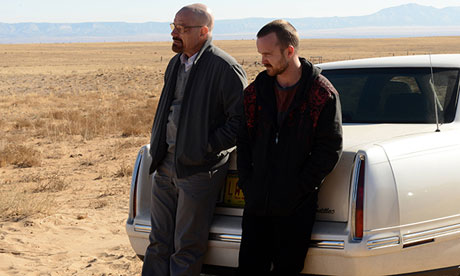 “It’s all straightened out now … it’s cool.” So says the increasingly disturbing Todd Alquist: well I hate to disagree but things seem very un-straight to me. After opening the episode with his brief voicemail to Walt, Todd returns to the diner where he regales his Uncle (and a generic goon) with the time he participated in the biggest train heist in history, totally leaving out the bit where he kills a defenceless child. No, I’m sure that’s not at all psychotic.

This week’s episode was cheekily entitled ‘Confessions’. First we thought it might be referring to Jesse pouring his tortured soul out to Hank, then it seemed that it would be Walt who has finally capitulating to his brother-in-law. But no, in fact, we were treated to a category of episode that never fails to disappoint: The Walter White Offensive. Nothing really compares to the sight of Walt on the front foot: confronting Tuco; assassinating Gus Fring; or even dispatching an entire outfit of men spread across several prisons in the space of several minutes. It’s the way in which, with his back pressed to the wall, this seemingly ordinary man doesn’t just hastily paper over the cracks, he taps into some higher plane of malevolence that his seasoned criminal adversaries never see coming.

It was a particularly bad episode for Hank Schrader. First his attempts to lean on Jesse fell flat on their face (there’s a lovely quiet and understated performance from Dean Norris here).  The next minute Hank finds himself the victim of a Walter White masterstroke.  How long had the idea to frame his brother-in-law been gestating in Walt’s follicle-less head? At what point did he realise he could pick up the drug empire sitting on his lap and just drop it on Hank’s? Yes, for Hank, it was the kind of episode where the only thing that could possibly make it worse would be to find out your wife had inadvertently used drug money to pay for your hospital bills, thus critically implicating you in the aforementioned drug empire. On a side note, the Trot in me can’t help but think that Hank’s dilemma here, along with the entire conceit of the show, could have all been sorted out with a proper national health system – but I digress.

After a dinner in which the only way things could’ve been more awkward was if one of the attendees had arrived covered head-to-toe in their own faeces, the episode shifted from the White/Schrader dynamic to the steadily deteriorating relationship between Walt and Jesse. Walt and Saul would have to find a way to get Jesse out of the picture – preferably without sending him to Belize.

When Jesse pleads with Walt to “Stop working” him, my mind drifted to those precious moments when the two were cooking and Walt didn’t see Jesse as a means to an end, but as a former student finally learning to apply himself.  At no point did we really think that Jesse was going to take Walt up on his offer on a one-way ticket out. Even when the two were sharing what was surely their final embrace, it never felt like goodbye. Like Skyler sat in her office starting off into the distance, Jesse knows his broken soul was always going to be lassoed back in to the oncoming storm.