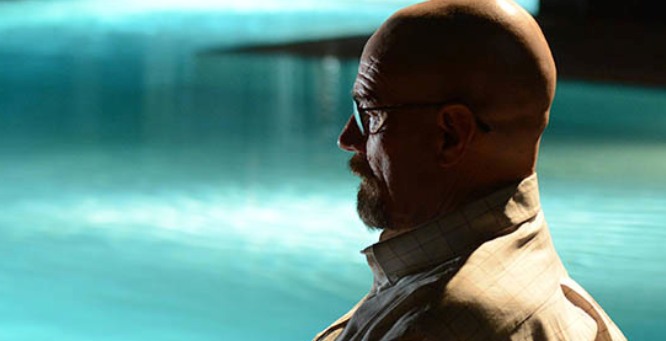 It’s got to that stage where I’m finding myself trying to not like Breaking Bad just so I can break out a different set of adjectives. I feel a bit fatigued by how persistently thrilling and surprising it is. This week’s episode saw two mammoth tectonic plates of manure (or Hank and Jesse, as they prefer to be called) hurtling face-first into Walt’s big fat lying face.

It was an episode all about ripple effects. OK so basically any episode of any TV show is about ripple effects – because something happens and there is a reaction to it – but just stay with me here. What I’m saying is, it was about how the sum of Walt’s deeds has drastically and irrevocably changed the people closest to him.

Skyler is probably the most obvious example of this. Remember that woman who was appalled when she thought her husband smoked marijuana? That was her! But something primal has been awakened in Skyler, since she joined the criminal fraternity. Whilst Walt is stuck trying to rationalise and scheme his way through things, Skyler has shown she’s far more willing to and capable of getting her hands dirty. There was a great moment in this week’s episode when Skyler presumed that Walt was talking euphemistically when he said he would “reason” with Jesse. As Walt looked morally outraged, Skyler reminded her husband, “We’ve already come this far … what’s one more?” What gives Walt his edge, as a criminal, is that he’s unconventional, usually finding some left-field approach to avoid killing until it’s his only option. But Skyler is, to steal phrase from a former VP candidate, a Momma Grizzly; when her family is in jeopardy she doesn’t blink.

Next up, Hank Schrader. Having been down and out last episode, he’s now back in pole position (it just seems appropriate to use sporting metaphors in conjunction with him).  So as his ‘bessie’ mate Steve worried whether they might be risking Jesse’s life, Hank simply countered, “Pinkman gets killed, we get it all on tape.” I don’t know about you, but to me that smacked of a desperation we’ve never really seen before in Hank (not to mention the fact he’ siding with a guy he once beat to a pulp, but maybe that’s why Hank views him as expendable).

So here’s where we come to Jesse, and this was the part of the episode that didn’t totally add up to me. Jesse is now so fixed on bringing down Walt that he sides with the guy whose invitation he refused barely an episode ago. On top of that he’s just come off the back of a signature self-destructive bender. So now he’s presented with a chance to nail Walt in one meeting and suddenly he starts to care about his own neck again. I suppose everyone gets scared but it didn’t quite wash for me. Although it did lead to an inspired piece of dialogue, as Jesse explained that Walt was the devil because he’s “luckier” than everyone else, “the exact reverse opposite” of what you expect to happen always occurs. What did work for me though was the tragedy of Jesse’s character here. All that time spent as Walt’s pawn and now he’s just a pawn of the DEA; the one person who actually cares a crumb for him is the guy whose life he feels compelled to destroy.

So to recap, this was an episode all about ripple effects. It was about how all of Walt’s sins tainted those around him, forcing them to follow him down the dark path he’d forged. The episode ended with Walt turning to Todd (or ‘Evil Jesse’ as he should unofficially be known) in desperation. Everyone seems to be caught up in a nuclear arms race of who’s willing to become the darkest of the lot.