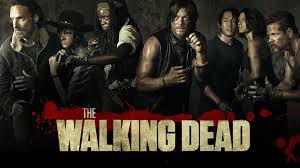 Yes there has been some parts that I have adored. Mainly scenes that have been taken from the comic books. My personal favourite, the scene I have been waiting for since we first met them, when Eugene confesses that he doesn’t know how to save the world. There was also the slightly changed cannibal scene which saw Bob laughing hysterically when Gareth and his “hunters” from Terminus are eating his “tainted meat” leg.

Despite these 2 scenes giving me great viewing pleasure they do not make up for what has been a mediocre half season. Looking back the plot of The Walking Dead has not progressed significantly for quite a while. While the group were making a home of the prison there was plot and development and movement but since the fall of the prison the group and the plot has gone backwards.

At the end of this half season we have found the group back in Atlanta, where we started way back when Rick looked oddly like the adorable guy from Love Actually who was infatuated with Keira Knightly. I am not one of those fans of the show who demand it sticks to the comics, but I also would like the show to follow its route through the apocalypse and continue the brilliant plot and story that Robert Kirkman created in the comic version. Right now we have what was a brilliant show becoming mundane and “bogged down” due to the plot not moving forward.

The entire second half of season 4 led up to Terminus which seemed to be an interesting development, but what happened was hours of good plot and build up immediately stopped when everyone decided to immediately fight and kill one another. The survivors from Terminus decided to get revenge on Rick and the group and this became “The Hunter” storyline from the comics, which is a personal favourite of mine.

I have no qualms with the use of the story line it was just unnecessarily dragged out over 2 seasons for far too long. If they directly lifted or slightly edited the comic storyline it could have been a very tense and nerve racking episode or two of television  with the group being hunted and eventually becoming hunters themselves. Instead we had hours of build up and useless plot, much like season 2 (“Where’s Carl?”, “Carl get in the house”, Rick and Shane disagreeing).

Once all of this finished, much too quickly and not nearly satisfyingly enough after the build up, we found the group, again, irritating split up into little groups. Which ultimately ended with everyone finding one another and one of the only interesting characters of late (in terms of character development) being killed in a needless way. Beth went from a glorified babysitter to a character showing real depth and fight but as soon as we started seeing this she was killed for stabbing someone needlessly in the shoulder.

In my eyes this first half of season 5 of The Walking Dead has been lazy writing, splitting the group up into 3 groups to fill an episode up with each group rather than really progressing the show and plot forwards.