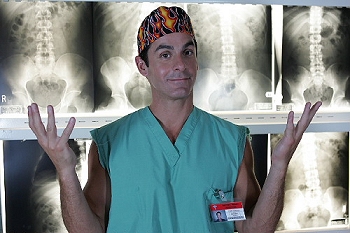 As many know, Scrubs eventually came to an end and after 9 years of playing the legendary Dr. Todd; it was time for Robert to move on. He made notable appearances within As The World Turns, Holywoo and Cougar Town, but Fortitude Magazine managed to grab him during our visit to London’s Film & Comic Con.

This is what he had to say:

Hello, how are you today?
I’m, good thank you!

So your most iconic role was playing The Todd in Scrubs, alongside Zach Braff, how has that role changed you’re life?

Well, it was a show that ran for nine years, so I had steady work as an actor in Hollywood for nine years, and The Todd himself was a great character to play on a great show, so it created a lot of opportunities for me in life. I went from renting a home to owning a home, and I met my probable future wife on the set of Scrubs. So, it was totally life changing.

Do people really think you act like The Todd?

They always think I’m just like the character on the show! But I always say that I’m not, with one exception; we both have huge HOGS!

How many times today have you been asked for a high fived today at the London Film & Comic Con?

About 500 times. My hands are filthy! If I touched you, you would probably get herpes.

The Toddtime was only on for about three months, then ABC lost the rights to it, then it got shut down.

How was it reprising your role as The Todd in Cougar Town?

It was fine, its was like nostalgia. It was like only just an inside joke for people, who watched Scrubs and really got what was going on.  But for Scrubs fans; it was awesome, so I was happy to do it.

Are there any new projects coming up for you?

I will hopefully have some more projects coming up in the fall. I’m auditioning for TV shows all the time.

Can you tell us more about it?
No, because I don’t know, I wish I could! But I don’t know.

As you can see; this isn’t the end for Robert Maschio just yet, as he continues his adventures with auditions across Hollywood. One thing is certain, we do miss you Dr. Todd!

To keep up to date with Robert Maschio, follow him on: