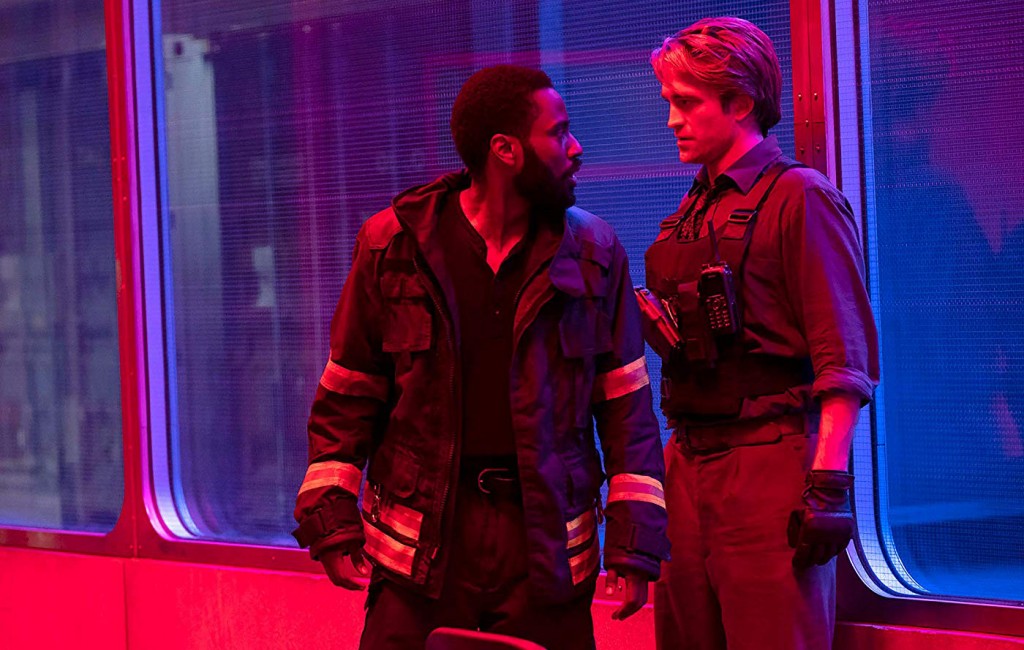 “Visually, Tenet is dynamic and stunning. The film is littered with high-stakes set-pieces, and Nolan’s technical know-how is fully on show in these moments, expertly guiding us through intense and explosive sequences.”

Perhaps one of the few names in modern Hollywood that could get bums back in cinema seats, Christopher Nolan returns with his time-bending, plot twisting new spectacle; TENET. It’s a lot to take in, and will no doubt leave many scratching their heads in frustration, but Tenet has a lot to offer both to the time-travel genre and Nolan’s body of work.

When we all got our first glimpses of Tenet way back in December, comparisons with Inception (2010) were quickly made. A high-stakes, perspective-altering thriller with grounded sci-fi tropes and heist type sequences? It made sense to compare the two films. However, after seeing what Tenet has to offer it would be fairer to say it is more like Inception’s scruffier, more edgy cousin, than a direct comparison. The main cast is a lot smaller, and the scope feels a little more reigned in and less polished. That isn’t to say Tenet doesn’t provide grand-spectacle and beautiful visuals, because it does. However, it’s far more concerned with playing out the mechanics of its world than blowing your mind with philosophical questions and visually pristine CGI.

Since The Dark Knight Rises, there has been a suggestion that Nolan has moved further and further away from character driven projects to focus more on visual spectacle. Dunkirk was a master-piece in visual storytelling, but it’s characters were more blank slates trying to overcome immediate physical dangers, rather than deep characters with an over-arching story. There is definite evidence for this theory, as argued by The Royal Ocean Film Society‘s fantastic video essay entitled ‘Confessions of a Christopher Nolan Fanboy’. With regards to Tenet, there seems to be a slight shift back to developing character, but perhaps not to the level of The Prestige or The Dark Knight.

Can you say that again?

The opening 35-40 minutes are an absolute whirlwind, as Nolan bombards the viewer with exposition and set-up. Everything is very procedural, and moves from one location to the next. At first it’s tough to decipher exactly what kind of film you’re watching. Key details are left purposefully ambiguous, which initially is frustrating but eventually pays off. It seems Nolan is trying to keep you in the dark by any means necessary. Dropping the viewer in the deep end, and leaving them in the dark to find their own way. There seems to be intentional use of excessive sound to mask what characters are saying at key moments. It’s almost deafening at times, as the intense volume of Ludwig Göransson’s score and the surrounding world masks character dialogue. It forces you to crane your neck in an attempt to understand what is being said.

Tenet’s high-concept is special, the way in which Nolan has approached time travel is truly fresh and original. The mechanics of the world are smart, inspiring, and tangible. However, Nolan seems more obsessed with his concept than the story taking place. Many of the characters initially lack depth, and it isn’t until much further into the runtime that you start to get some sense of who these people are, and what they care about. Again it is tough to say what is intentional and what isn’t when it comes to a Nolan film, because he’s such an intelligent writer and director.

It is however quite clear that John David Washington’s role as ‘The Protagonist’ isn’t given enough to work with. Everything he does feels underplayed, and despite his cool and collective demeanour (which is bond-esque at times) his character lacks any genuine range. This isn’t specific to Washington, but spans most of the cast. It isn’t until the arrival of Kenneth Branagh’s truly despicable Andrei Sator that we are given a character we can really sink our teeth into.  Branagh’s menacing and intense performance immediately takes the reigns of both the story and the surrounding cast. Once he arrives it gives the other characters and the story the focal point they need to bring everything alive, beyond just a smart concept.

A Master at work

Visually, Tenet is dynamic and stunning. The film is littered with high-stakes set-pieces throughout, and Nolan’s technical know-how is fully on show in these moments, expertly guiding us through intense and explosive sequences. This truly comes to fruition towards the film’s climax as Nolan juggles between the mechanics of the ordinary and extra-ordinary simultaneously, seamlessly switching between two perspectives whilst setting the screen alight with visual flair.

The use of colour is perhaps what stood out the most, particularly the way red and blue are used to highlight what is now and what is then. This colour palette manages to explain the rules of this world, and is far more useful than any of the exposition previously provided, demonstrating the power of visual storytelling.

Tenet definitely goes out of its way to make you scratch your head, but manages to bring everything together by the climax. Branagh is without a doubt the stand out performance, and he brings the best out of Elizabeth Debicki as the trapped wife and desperate mother. Despite the rushed pacing of the opening act, the film eventually comes into its own and sets itself apart from Nolan’s other works. Even with those initial frustrations, there’s an awful lot to like here, particularly from a technical standpoint. The plot is complicated, and wraps around itself in multiple ways, but once all the pieces come together you can’t help but be impressed with what has been achieved. It’s safe to say Tenet will definitely require repeat viewings, but that’s what we want from a Nolan movie.