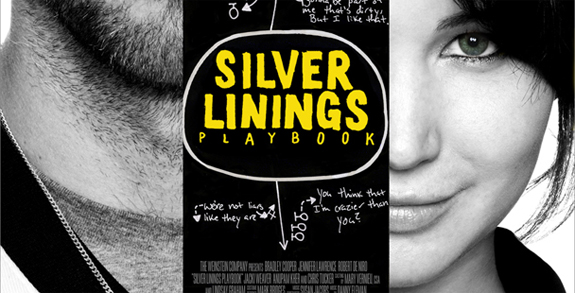 Back in October, Silver Linings Playbook was the ‘secret film’ screening for the London Film Festival, a film which I stupidly decided not to take the risk with and since have been kicking myself thanks to the praise it received. Finally, I can stop this pointless kicking as David O. Russell’s latest has been released to the general public at long last. And boy is it a treat!

Silver Linings had a lot to live up to seeing as it is David O. Russell’s first film since Oscar winner  The Fighter and with a great cast line up including Bradley Cooper, Jennifer Lawrence, and Robert De Niro it was already on it’s way. As Pat (Cooper) is released from a mental institution 8 months after a run in with his wife, Nikki’s secret lover he is given a whole new perspective on life and tries to see the ‘silver lining’ in everything as he tries desperately to get back with Nikki. A job which proves difficult due to the restraining order she has on him. Cue recent young widow Tiffany (Jennifer Lawrence) who is Pat’s only connection to his wife. As Tiffany makes an agreement with Pat to deliver a letter to his wife the two become closer as Pat keeps up his side of the bargain by helping her practice for a dancing competition.

All the while we have Robert De Niro and Jacki Weaver as Pat’s parents in the background trying to connect with their son more. Whilst Weaver doesn’t have much to do De Niro seems to be coming slowly back to form with a football obsessed, gambling father character to play with. The only downside of this is we never get to see him go full De Niro. A nice money collecting scene would have been fun however this isn’t a Martin Scorcese film so we’ll just have to make do for now.

The highlight of the film is clearly Jennifer Lawrence. With both emotional and hysterical aspects of her character to indulge in it’s a treat to see her acting career gradually rising. If she keeps this up hopefully she won’t be sucked into the horrible franchise rule of forever being referred to as ‘that girl who plays Katniss Everdeen in The Hunger Games’. From her first introduction to her brilliant and sudden sidesteps into the frame with a sudden ‘HEY!’ as she quite literally chases Pat until he gives up trying to avoid her, Lawrence is fantastic.

Although the film does get through a lot and probably could have done with a bit less gambling and football involved in the end result, it’s still a treat and shouldn’t be missed. If this doesn’t get at least one mention during awards season I’ll be surprised.