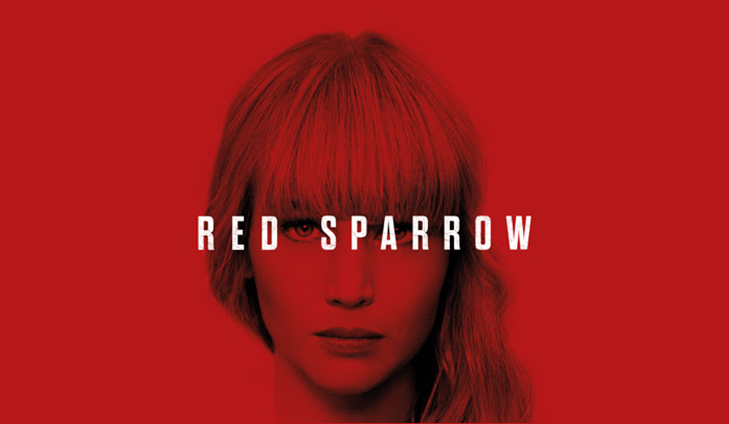 Directed by Francis Lawrence and adapted from the novel by Jason Mathews, Red Sparrow centres around talented ballerina Dominika Egorova (Jennifer Lawrence) who under the vehement of her politician uncle Ivan (Matthias Schoenaerts), goes through a fierce program to become a Sparrow; a Russian spy that uses skills in seduction and control in order to gain important information for the state.

Francis Lawrence takes his seat in the director’s chair for the fourth time with Jennifer Lawrence in front of the camera as the lead; their first 3 films together were the final 3 Hunger Games films. If you have seen any of the films from the Hunger Games franchise, then you will realise there was no surprise why both of Jennifer and Francis were attached to this project, just like the Hunger Games, Francis creates a cruel, merciless and unforgiving world where the people are owned by the state and have no hope of freedom, while Jennifer Lawrence plays the role as a “tribute” who plays the game in order to make sure her family (in this films case, her mother, played by Joely Richardson) is safe from the fist of power that looms over their heads. However, this world is not Panem, this world is Russia.

Apparently, no one in this Russia can speak Russian, bar a few moments that can be counted on one hand, barely a single word is spoken in the countries native tongue. In fact, there isn’t even a Russian actor cast in a Russian role, Jennifer Lawrence is American,  Matthias Schoenaerts is Belgian, British Academy Award winner Jeremy Irons plays a Russian general, Irish actor Ciaran Hinds depict but another Russian politician and British actress Charlotte Rampling gives a cold, menacing and overall excellent performance as the Headmistress of the Sparrow program. The closest the casting director got to Russia on the map was with Polish actor Kristof Konrad, who has a small role as yet another member of the state. This comes as no surprise, as mentioned, Francis Lawrence creates a cruel world, a world painted in a cold blue and green colour scheme. There’s no spectacular visuals, no sweeping views of Moscow’s Kremlin or Saint Basil’s Cathedral.

From the description so far, one would think Red Sparrow is a typical Hollywood produced, post-Cold War film that paints Russia as a villainous nation. In many ways, it is, but what sets it aside from other films of this nature, lies within the acting talents of the films leading lady, Jennifer Lawrence.

Jennifer Lawrence’s depiction of Dominika is yet another example of her being the go too lady in Hollywood for strong, powerful female roles. Dominika is disciplined, athletic, cunning, smart and beautiful, all attributes that we know Lawrence has in abundance. Her presence holds the screen, with only Schoenaerts being able to create a supporting role that adds to that presence. Joel Edgerton’s role as Nathaniel Nash is not as prominent as one would think, he has the qualities of the typical leading man; an agent trying to always do the right thing, but he isn’t the knight in shining armor who’s here to sweep Dominika off to the land of the free. Dominika’s faith is well and truly in her own hands, and the movie always keeps you wondering, what is her mission?

Overall, Red Sparrow is a very watchable movie, it has well-crafted scenes, and it keeps you in a nice grip throughout. It always keeps you guessing, and above and beyond, the performance by Jennifer Lawrence alone keeps you watching. However, the movie is missing something to raise it to “classic spy movie” status. It’s not as action-packed as a Bourne film, nor does it have the style of a Bond movie, perhaps it tries a bit too hard to shock, or maybe how it depicts Russia as having an oppressive regime over its people is a bit far-fetched. Or is it? One would hope not.

At the end of the day, the concept threads a bit too close to being a typical Russia bashing post-Cold War film, but Jennifer Lawrence pulls it back to make it a bit more than that; just a bit.