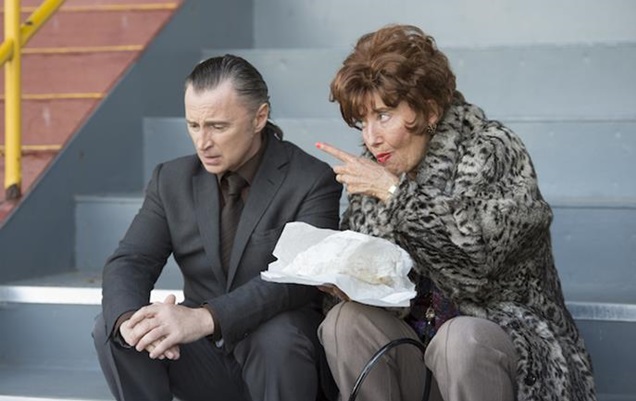 Boasting a creative, visual richness and a fun, old fashioned soundtrack, Robert Carlyle shows a lot of promise in moving behind the camera.

Robert Carlyle has had an association with the Edinburgh International Film Festival for years, and will always be a part of the cinema culture in Scotland’s capital due to his unforgettable role as nut-case Francis Begbie in Danny Boyle’s Trainspotting.

It only seems right that when the established actor turned film maker, the world première of his debut would take place in Edinburgh, and it is this year’s Opening Gala film. Adapting the first in the a series of seven books from fellow Scotsman Douglas Lindsay, ‘The Legend of Barney Thomson’ tells the comic tale of a hapless barber, played by Carlyle, who escapes the mundanities of his existence by accidentally becoming a serial killer. Before long, cockney copper Detective Inspector Holdall (Ray Winstone) is on his case, and Barney is forced to turn to his chain-smoking, bingo-loving mum Cemolina (Emma Thompson) to get him out of trouble.

Filmed in the director’s home of Glasgow, the city is coated in a sheen which goes against the gritty stories it usually provides a backdrop for and sets it in a more favourable light with comic-book elements suited to the black comedy subject matter. The sick wit is presented in a way that shows influence from his friend and previous collaborator Irvine Welsh and the cinematic adaptations of his novels. Techniques like Barney’s narrative voiceover and the colloquialisms such as “nae patter” in the dialogue serve to extenuate the similarities. Because of this stylistic approach, a Filth meets Sweeney Todd vibe is created, and the obvious comparison to the latter is eluded to in the script. The overarching plot and its structure take a familiar shape pretty quickly when Barney’s accidents spiral out of control, so much so that you can almost find humour in moments before they occur on screen.

Because of its air of predictability where the story-telling is concerned, the film relies on the performances from its experienced cast, and boy has it got one. Carlyle himself is hugely impressive as sappy Barney, managing to create likeability and empathy for the protagonist, given his careless homicidal activity. The scene stealer is Emma Thompson, who is nearly unrecognisable from a physical standpoint. Despite being just two years older than Carlyle, she carries off the role as his eccentric mother with ease, due to clever prosthetics and sheer talent. She is certainly the most memorable from the supporting characters, and brings the biggest laughs with her dry delivery in a finely tuned thick Weegie accent. Winstone is caricature-like but entertaining as a fish-out-of-water Londoner and other small job stand outs include Brian Pettifer and Tom Courtenay.

‘The Legend of Barney Thomson’ takes a simple, yet incredibly funny story, and successfully transforms it for the big screen. Boasting a creative, visual richness and a fun, old fashioned soundtrack, Robert Carlyle shows a lot of promise in moving behind the camera, and in getting strong performances from those in front of it whether he wishes to or not. Given the vast versatility in his acting back catalogue, there is potential in whichever genre he should wish to venture into next. The director’s chair is a comfortable place for Carlyle to sit, but I for one won’t be resting in Barney’s barbershop chair any-time soon!

The Legend of Barney Thomson gets its UK release on July 24th.