Surprise Surprise: “I want to show people you don’t have to donate money to help” 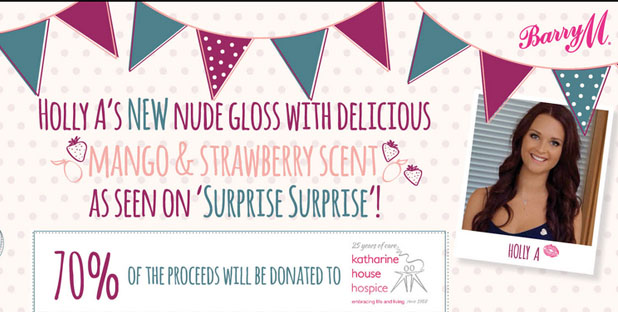 What a whirlwind few weeks it has been for Stafford born Holly Addison, from getting one hell of a surprise from Pharrell Williams, to launching her very own Barry M lip gloss and getting her story recorded for ITV’s new series of Surprise Surprise – and not being able to say a word about it!

We caught up with the charity fundraiser, who lost her farther to an aggressive form of brain cancer in 2013, to find out what’s been going on, what the idea is behind her new project ‘The C Word’ and why our perceptions of charity need to change.

TS: Hey Holly, how are you getting on? I imagine it’s been pretty nuts?

HA: It has been a so CRAZY. I’m still struggling to get my head around it all. I really don’t want to miss this opportunity to do something special, so i’m doing as much as I can.

TS: So, what’s the idea behind The C Word?

HA: The C Word aims to alter the views the world has about the word “Charity.” For example, before I had visited the hospice that was caring for my dad, I thought of them as dark, miserable places where people went to die. That is far from the case. Yes, hospices are not the nicest of places, but the common perception of them is so wrong. I explain more about this in The C Word’s first video – ‘My Story‘.

TS: What do you hope to achieve with The C Word?

HA: I want to form a sense of community. People coming together to share their stories, relate to them and educate each other about the amazing charities we have in the UK that so many of us don’t know about. The C Word will share a range of videos online. These videos will include real stories from real people, features of charities and coverage of fundraising events going on all the time around the country. It will be REAL people with REAL stories.

TS: What is your motivation behind starting The C Word?

HA: It comes from a personal interest in wanting to raise awareness for health charities, especially the smaller local ones. I think it is important for people to know what services are around them that can offer help before it is too late, or before a family has to act in a moment of crisis.

TS: Is it a common story you’re seeing that people aren’t aware of the services on offer to them locally?

HA: I have been speaking to a range of people, about their stories, and it is a common theme that people have said they were not aware of the services that could have helped them straight away and they were unable to benefit from them for as long as they could have – it is good to know what is available before you need them.

TS: What perceptions in your mind need to be changed around the word Charity?

HA: I feel a common perception of “Charity” is a very old fashioned one. I want to show people you don’t have to donate money to help. There are so many other things you can do now to help support a charity in some form such as; volunteering, raising awareness (which is even easier now with the power of social media) and attending charity events.

With fundraising events, again the perception is out-dated. People think of them as boring, emotional and for “older people.” That needs changing. Fundraisers can come in all sorts of formats such as gigs, fashion shows and casino nights for example, many of which you would pay money to attend anyway.

The perception about Hospices, which is very close to my heart is also something I wish to change. If I can have my perceptions of them change, I guarantee there are other people out there that can share a story that shows how their views of hospices, fundraisers and charities in general were altered by their experiences there.  Together we can come together and educate ourselves.

TS: How can people share their story with The C Word?

HA: Simply get in touch with me through The C Word’s Facebook or Twitter pages and we can talk. It is free to post a video and if one video can help just one person then it made a difference.

Holly was also lucky enough to work with Barry M to produce a limited edition lip gloss which launched last week on the Barry M website. Money raised from the sales of the lip gloss will go to Katharine House Hospice Stafford – the hospice that cared for Holly’s dad and inspired this amazing project.